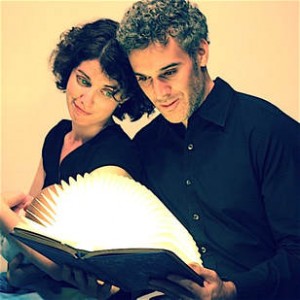 Patricia Lynn and Jordan Kaplan of “Pericles: Born in a Tempest.”

The nautical map of Shakespeare’s late-career seafaring adventure, Pericles, is getting revised this month Off-Broadway in an intimate five-actor production called Pericles: Born in a Tempest, conceived and directed by Jordan Reeves for Hunger & Thirst Theatre and The Guerrilla Shakespeare Project. The storm-tossed Prince of Tyre’s story is now seen through the lens of a modern-day woman, a young mother, who immerses herself in a book her recently deceased sailor father has bequeathed to her.

Director Reeves told me, “Our whole play takes place between the walls of an old sailor’s home, which has been packed up to be sold. We jump to many imaginary lands in our story, but they are figments of the young mother’s mind and not literal places.”

The circa 1608 source material (thought to be a collaboration between Shakespeare and another author, perhaps George Wilkins) was inspired by Greek stories, and had Pericles bouncing around the Mediterranean, fleeing evil rulers and risking life and limb — and, along the way, gaining and losing wife Thaisa and daughter Marina to forces of nature and corrupt characters.

As in other romances penned by Shakespeare late in his life, reversal of fortune and twists of fate — often involving nasty weather — play large roles in Pericles, and in this new 90-minute take on the seldom-performed classic. Pericles: Born in a Tempest plays Nov. 2-18 at the West End Theatre, 263 West 86th Street on Manhattan’s Upper West Side.

“There certainly are moments of ‘reversal of fortune’ in our play,” Reeves said. “However, I’ve scaled the text down and eliminated a few characters and plot points. The metaphor for life being a tempest that blows us where it will, not where we wish, is a big idea from the play that inspired me. Parenting — or the lack thereof — and how that can shape us is a huge theme I brought to the forefront of the reimagining of Pericles.” 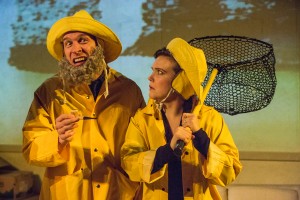 Reeves, an alumnus of the Brown University/Trinity Rep MFA program and artistic director of The Guerrilla Shakespeare Project, answered a handful of my questions in the days leading up to the first performance.

Take me back to the first moment of inspiration for Pericles: Born in a Tempest.

Jordan Reeves: I was first inspired to create Pericles: Born in a Tempest because of Bill’s beautiful scene of reconnection and catharsis between [father and daughter] Pericles and Marina. That scene between an old man who’s given up on life and his lost daughter broke my heart every time I read it. I find myself at the age where I’m thinking about becoming a parent, while at the same time worried that I might lose my own. So when I turned to Bill for guidance, which I do often in my life, the wisdom and depth of his Pericles really spoke to me.

Can you offer a little bit more about the story or people that we encounter in your production? Is Pericles at the center of the play?

Jordan Reeves: This is a reimagining of Shakespeare’s epic Greek tale, set inside of a very modern world. I have framed the play to focus on a young woman [played by Patricia Lynn] who simultaneously has been forced to bury her wayward father while at the same time becoming a new mother. It begins on a stormy night, directly after her father’s funeral. The young mother is angry and afraid: Angry with her dead father for leaving her in her time of need and afraid that she cannot be the mother she never had.

However, when they return to her dead father’s home, she finds a gift left for her by her father. It’s a book of the adventures of Pericles, who in this world was the name of her imaginary friend, which her father used to make up stories about when she was a child. As she reads the book, the stories come alive in her imagination, and her dead father steps into the role of Pericles. Through this magical, stormy evening she learns more about her father, life and how we all live on through our children. 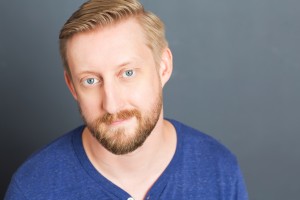 Is all of the text in your production drawn from the original play? Are there new scenes in the adventure?

Jordan Reeves: Yes. Every word is Bill’s. In fact, every word is from Pericles. However, I have taken great pains to create new scenes from his verse, and edited away parts that do not service this specific story of parenting. As a director and the artistic director of Guerrilla Shakespeare, I have spent the last decade focusing on Shakespeare as if he were a modern playwright. This work has led me into the work of reconstructing his plays for a modern audience. I’ve always believed he is as relevant today as he was 400 years ago. I believe it’s my job to hear what Shakespeare has to say to us today, in 2017, and find a vibrant and immediate way to bring his wisdom, beauty and humor to our current audience. It is a long but rewarding process, where I often find myself talking to the “ghost of Bill” and being delightfully surprised at what he has to say.

I’ve always loved that Pericles is bounced around by storms in the play. Do tempests surface in your production?

Jordan Reeves: Storms and tempests are a huge part of our show. We have quite literally storms raining down in our play, as well as fantastical tempest that appears in the mind — with the help of brilliant projection work by my younger brother Matt Reeves. 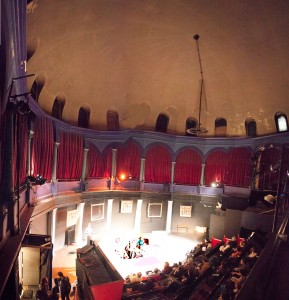 The West End Theatre within the St. Paul and St. Andrew United Methodist Church on New York’s Upper West Side.

Is it a spare design that encourages us to use our imagination or are we in the literal visual swirl of another world?

Jordan Reeves: I believe this production has a happy medium of both. At moments we’re alone, simply standing in a dead man’s apartment, then suddenly we fling our characters and audience into a world of colorful wonder and imagination. I’ve been working with most of my design team for years and they have truly outdone themselves with this production. It’s the perfect blend of stark reality and vibrant fantasy. The West End Theatre is 70-seat black box with a towering ceiling that can hold a lot of magic. Truly, the perfect place for our intimate show.

How does Born in a Tempest fit the mission of The Guerilla Shakespeare Project?

Jordan Reeves: GSP thinks of every Shakespeare play as a new play. As we like to say “We’re doing Bill’s latest work.” The company was founded a decade ago with the mission to foster a vibrant, passionate, and visceral connection between actor and audience and to make inventive and immediate American theatre from classical works. Struggling always for simplicity and precision, our company strives to make the entertainment and beauty of Shakespeare accessible to all. We prize the skillful uses of language and athletic storytelling, brought together by actors, directors, and designer, to blow apart the audience’s preconceived concepts of what Shakespeare has been by creating something new. Pericles: Born in a Tempest is our greatest stab at that to date. 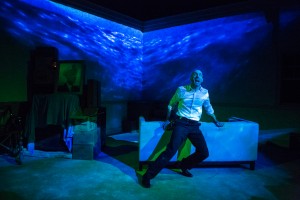 Jacques Roy in a scene from “Pericles: Born in a Tempest.” (Photo by Al Foote III)

Can you share a little bit about co-producer Hunger & Thirst Theatre and the nature of your companies’ collaboration?

Jordan Reeves: Hunger & Thirst is brilliant Off-Off-Broadway company that I have had the pleasure to work with as an actor in the past. They are founded on the idea of the importance of classical stories, and passing them on to a modern audience. So when their artistic director Patricia Lynn approached me about working together on a Guerrilla-style Shakespeare, it seemed like the perfect marriage. And it absolutely has been.

What was your first encounter with the work of Shakespeare, and was that nurtured in your education?

Jordan Reeves: My first memories of Shakespeare are from my adolescence in the Deep South. However, back then I didn’t immediately connect with his stories. I, like many, found them too dense, intellectual and distant — something to be held up on a pedestal and far from the world I currently lived in. But then in my mid-twenties I had the fortune to study acting at Brown University/Trinity Rep. While in grad school, I was re-introduced to Shakespeare, and this time he changed my life. Suddenly his words and thoughts become immediate and important in my life. I found I could find guidance and wisdom for any situation I faced by turning to Shakespeare’s canon for insight. It blew me away so much that I started GSP with a few classmates while we were still in school. Our mission then was the same as it is today: To bring Bill’s words and work to everyone, by knocking it off some imaginary pedestal and reveling the genius of humanity that he is.

The performance schedule for Pericles: Born in a Tempest is Thursdays at 7 PM; Friday & Saturday at 8 PM; Sunday at 2 PM. There are added performances on Wednesday, Nov. 15 at 7 PM and Saturday, Nov. 18 at 2 PM. Opening is Sunday, Nov. 5. Tickets are $15 in advance and $18 at the door. Get tickets here. The West End Theatre is located on the second floor of the Church of St. Paul & St. Andrew at 263 W. 86th Street (between Broadway and West End).