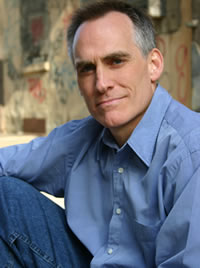 Amelia, the gritty Civil War-set romance that maps the journey of a young wife who disguises herself behind enemy lines to reunite with her Union Army husband, gets its Midwest premiere Oct. 17-Nov. 9 by Renaissance Theaterworks in Milwaukee. Playwright Alex Webb‘s two-actor drama fits the company’s mission of plays about indelible women under the direction of women theatre artists.

New York City-based actor-writer Webb wrote the play as a vehicle for himself (playing multiple roles) and his actress wife Shirleyann Kaladjian (as plaintive and tough Amelia). It’s one of those shows in which multiple locations, moods and personalities are created by nimble performers on a spare stage. A vast canvas forms in the imagination of the audience — you know, as it should be in the theatre.

Following its January 2012 world premiere by Washington Stage Guild in DC, Amelia had its New York City premiere that summer in a unique site-specific engagement in the powder magazine of Fort Jay, a 19th-century military structure on Governors Island off the tip of Manhattan. (That haunted, lamp-lit production on the grounds of a real Confederate prison remains one of my favorite theatregoing experiences ever.) The playwright said that he got the idea for his play from research he conducted while preparing to perform in the Civil War drama The Andersonville Trial.

Cassandra Bissell plays the title role in the Milwaukee premiere of “Amelia.”

The resident Milwaukee cast of Amelia features Cassandra Bissell as Amelia and Reese Madigan as Ethan and others. Laura Gordon directs. Opening night is Oct. 18.

Here’s how Renaissance Theaterworks bills Amelia: “Newlyweds Amelia and Ethan are torn apart when he must leave to fight for the Union army. Ethan writes Amelia faithfully until one day his letters stop. Terrified he has been killed or wounded, Amelia disguises herself as a Union soldier and begins a desperate search across war-torn America. Amelia’s dangerous quest leads her through the battlefield of Gettysburg and culminates at the gates of the infamous Confederate Prison Camp: Andersonville. Amelia pays tribute to the courage of ordinary people in extraordinary circumstances.”

Reese Madigan plays husband Ethan and a slew of other characters in the world of “Amelia.”

Filmmaker, playwright, director and actor Alex Webb is a recipient of the Panavision New Filmmaker Award. “Hove (The Wind)” (with Oscar winner Olympia Dukakis) has been an official selection at the Montreal, Palm Springs, Los Angeles, Boston, Palm Beach and Cleveland International Film Festivals. As an actor he has worked with Oscar winners Meryl Streep, Kevin Spacey, Ben Affleck, Olympia Dukakis and Melissa Leo and others. His first film, “The Girl in 2C,” received a silver medal at WorldFest – The Houston International Film Festival and was also seen at the Clermont-Ferrand Festival in France. His script, “Welcome to L.A.,” was awarded Honorable Mention in the Cinequest screenplay competition. Amelia was the first selection in Broadway producer Ken Davenport’s new reading series and has gone on to be produced around the country. His new film, “To the Flame,” in which he appears with Shirleyann Kaladjian, is in currently post-production. As a stage actor, he has appeared in theatres around the country.

Renaissance Theaterworks was founded in 1993 by Suzan Fete, Marie Kohler, Raeleen McMillion, Jennifer Rupp and Michele Traband, who drew on their expertise in acting, directing, writing, administration and business management. “The formation of RTW was meant to address the lack of professional opportunities available to women in theatre,” according to the RTW website. “RTW is inclusive in its hiring practices and uses the talents of both men and women in their productions, administration and board of directors.”

RTW produces “moving theater that awakens our recognition of what it is to be human — from classics to world premieres — with attention to women’s roles onstage and off.”