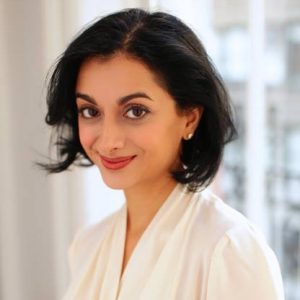 A Manhattan apartment building populated by newlyweds, a visiting mother-in-law, nosy neighbors and a picky co-op board is the setting of actor-playwright Nandita Shenoy’s romantic comedy Washer/Dryer, getting its New York City premiere by Ma-Yi Theater Company through Feb. 20 in the Beckett Theatre at Theatre Row. The play is a classic case of “write what you know,” the playwright told me.

“It was absolutely inspired by the antics I saw and experienced in my own building, which is a co-op,” Shenoy said. “At one point, everyone in my building had to prove with photographic evidence that we had rugs covering 80 per cent of our floors. Dogs have also been outlawed, which caused a small mutiny. Honestly, co-ops are so crazy that I had to choose what elements to include in the play.”

The play premiered in February 2015 in a separate production by East West Players in Los Angeles and was later produced that fall by Rasaka Theater in Chicago. Ma-Yi Theater Company is devoted to Asian American dramatists. Shenoy plays the role of newlywed Sonya in the Off-Broadway premiere.

Here’s how Ma-Yi bills Washer/Dryer: “Sonya and Michael’s recent elopement in Vegas seemed like a dream come true for both of them until they try living together in Sonya’s Manhattan studio apartment. As they discover that they haven’t been entirely honest with each other or themselves, their secrets come home to roost along with an intrusive mother, the co-op’s strict Board president, a harsh best friend, and a fabulous washer-dryer. Mayhem ensues as the couple is forced to re-evaluate their relationship and decide whether all really is fair in love and real estate.”

“The play’s title refers to that ultimate appliance that can turn a hum-drum apartment into a coveted piece of real estate in Manhattan,” Shenoy said. “Sonya, the play’s protagonist, finds herself faced with having to choose between her husband and her washer-dryer, which as any New Yorker knows, is a pretty tough choice.”

Scroll down to read more of my chat with the playwright. 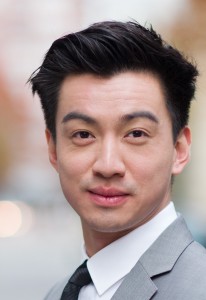 To learn more, or to order tickets, visit the Ma Yi website.

Nandita Shenoy lives in New York City. Her play Lyme Park: An Austonian Romance of an Indian Nature received a workshop production at Round House Theatre in Silver Spring, MD, produced by theHegira. She is the winner of the 2014 Father Hamblin Award in Playwriting from the Abingdon Theater Company for her commissioned one-act Safe Haven. Her other one-acts Marrying Nandini, By Popular Demand, Rules of Engagement and A More Perfect Date have been produced in New York City as well as regionally. Acting credits include premieres of Eric Pfeffinger’s Some Other Kind of Person and Richard Dresser’s Trouble Cometh as well as a season as a repertory company member at the Alabama Shakespeare Festival. She is a member of the Ma-Yi Writers Lab and the Dramatists Guild. She holds a bachelors degree in English literature with a distinction in the major from Yale University. 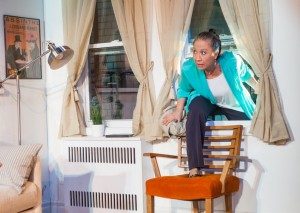 Take me back to the first moment that sparked the play. What did you “see” first? A conflict? A character? A place?

Nandita Shenoy: I wrote the first scene first with the idea that I wanted to write something about the insanity that is New York real estate. I love romantic comedy, and so it just naturally went in that direction. The play hovers between rom-com and farce.  Things get pretty crazy and pretty absurd by the end of the play.

Have you rewritten the play since its world premiere on the West Coast? Share a little bit of what “grew” after L.A.?

Nandita Shenoy: I have rewritten since L.A. The bones of the play have remained intact since the very first draft, but I have put significant work into tightening up the ending.  I’m lucky that I have had the opportunity to see the play produced multiple times and have time in rehearsal to keep tweaking and strengthening.

You didn’t play Sonya in the premiere. Why are you stepping in now?

Nandita Shenoy: The Off-Broadway production is fully new with a totally different team.  I wanted to wear only one hat for the first production since the East West Players’ production was my very first regional production.  But I had always hoped to play the role since she is so dear to my heart and so much a part of me. Also, I have been working with the same director in New York for two years and thought that this was the perfect chance for me to do my own work in partnership with someone I really trusted, Benjamin Kamine. He agreed, and here we are.

What sort of plays do you love and respect as an actor or as a theatregoer, and did they influence the writing of Washer/Dryer?

Nandita Shenoy: I love all kinds of plays but will admit that I veer toward comedy because I love to laugh. I started in the theatre as a musical theatre dancer, and so I am always drawn in by great physical work. And being an English major in college made me a lover of clever or intricate language.

Can you share a little bit about your transition from actor to dramatist, or have you always been a writer? How does being an actor inform your being a playwright?

Nandita Shenoy: My entree into theatre was as a performer, and being on stage will always be my first love. That said, I started writing out of frustration with the kinds of roles I was seeing as a South Asian American actor. I try to write roles that challenge actors in ways I don’t see on stage. For instance, where else might you see two Asian Americans playing romantic leads? 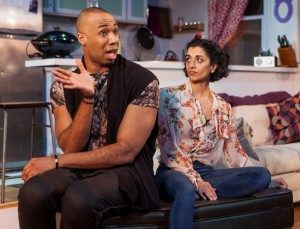 We live in a time when artists of ethnicity are invisible or marginalized into clichés. What elements in the play did you write as being culturally specific to the Asian or South Asian experience? Does heritage drive these characters?

Nandita Shenoy: I am part of an advocacy group called AAPAC (Asian American Performers’ Action Coalition) which collects statistics on hiring practices of local theatres among other advocacy activities. The stats are pretty bleak, and I think part of my advocacy work is to write for my community.  That said, I also feel strongly about presenting a perspective on Asian American culture that is not grounded in feeling sad about being Asian. Everything does not have to be about identity politics. Being South Asian certainly informs my experience but is not the totality of it.

A criticism of past productions of the play is that it deals too much in stereotypes which I think is a rather shallow reading of the play. I’m actually seeking to turn stereotypes on their heads in the play. The central premise of the play is based on a woman who finds it hard to give up the trappings of her single life when she gets married, smashing one of my personal favorite stereotypes that single women will do anything to get a man. But also the Chinese American mother-in-law rather than being obsessed with her son finding a Chinese American wife actually acts out of fear of being replaced in her son’s life. Sonya’s gay best friend is the sole voice of reason in the play, challenging the stereotype of the flamboyant gay man as ridiculous. And, of course, the play’s central relationship between an Indian American woman and Chinese American man challenges the stereotypes that Asian Americans are not sexy and can’t play romantic leads. It was very important to me that each character have a full life that was unique to them rather than be a “type.” They may look like stereotypes at first glance, but my hope was to find something real underneath that. 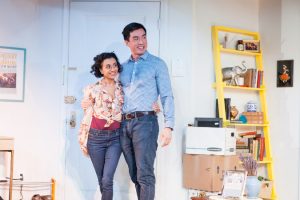 When you write plays, do you write roles for yourself? Did you see yourself as Sonya from the start?

Nandita Shenoy: I don’t purposefully write roles for myself, but there always ends up being one character who sounds like me. I shied away from acting in my own plays for a long time because I felt I needed to learn about the process of writing and also because I felt that the media was much harder on women who create their own work.  But as time goes on, I’m ready to let go of those fears because I love performing in my own work.

What was the major challenge of crafting Washer/Dryer? What kept you up at night?

Nandita Shenoy: The ending! Tying everything up without falling behind the audience was the real challenge of this play. But honestly, I had so much fun writing it that it’s not fair to say it kept me up.

How much is “theme” a part of your writing process, or does theme arise out of action and character, to be gleaned/perceived by the audience? Were you aware of theme as you were crafting the play?

Nandita Shenoy: I think I care more about character and plot than theme.  There are different themes that mean a lot to me (feminism, accurate representation, equality, love, friendship) that show up in all of my plays, even unintentionally. While Washer/Dryer is a rom-com, there is also an important scene about the importance and value of friendship that means a lot to me. I didn’t set out to write a counterpoint to the romance but naturally found that it had to be included.

Was the play first developed in Ma-Yi’s Writers Lab?

Nandita Shenoy: Yes. I am a member of the Ma-Yi Writers Lab and wrote the play with the support of the Lab in the spring of 2013. Ma-Yi was kind enough to offer me several workshops for the play in 2014, and last year decided they wanted to produce the play. Of course, it is tremendously gratifying to have the play come to New York at my artistic home.

Share a little bit about your childhood — where you grew up — and your early exposure to the theatre or arts. Did your parents encourage your connection to the arts?

Nandita Shenoy: I grew up in Buffalo, NY. My mom enrolled me in dance lessons because she had studied Indian classical dance as a child and thought it was important for me to learn about art and to develop a dancer’s control of my body. But she couldn’t find an Indian dance class, so she sent me to a ballet-tap combo. I remember my first recital and falling in love with being on stage at the age of six. I saw a lot of musicals and dance as a child, but also watched a lot of comedies in film and on TV with my parents, which has influenced my style.

Where did you earn your Equity card?

Nandita Shenoy: I did an Off-Broadway musical called Sheba a long time ago. I had come to New York to pursue modern dance but was quickly converted to the theatre by the talents of my cast.

What’s next for you as an actor or writer? What are you working on?

Nandita Shenoy: I am going on vacation after the show closes! I do have a commission for a new play, through Flux Theater Ensemble, which I have started and need to finish.