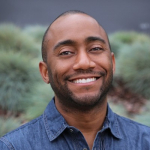 A troubled war veteran shakes the lives of residents of a South Side Chicago apartment building in Joshua Allen’s The October Storm, getting its world premiere Oct. 8-23 by Hudson Stage Company in Armonk, NY. The playwright, who is currently a writer and producer of HBO’s “In Treatment,” told me the play is a kind of “pressure cooker” focusing on the dwelling’s landlady and her granddaughter.

“I knew I wanted to locate this play in a trilogy of plays set on different floors of an apartment building on the South Side of Chicago,” Allen said. “So I wanted to write a play set in the basement apartment that belongs to the landlady. And I knew she wouldn’t be all that nice.” 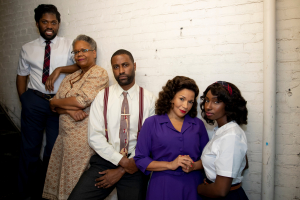 Here’s how Hudson Stage Company bills the play: “In 1960s South Side Chicago, a troubled war veteran moves into an apartment building and the residents become caught in an emotional whirlwind that threatens to change their lives forever. In the center of the conflict are the building’s landlady, Mrs. Elkins and her 16-year-old granddaughter, Gloria.” Get tickets and more information here.

Chicago native playwright and TV maker (he was also a writer and producer of the series “Empire”) Joshua Allen took some time out of his busy schedule in Los Angeles, where he now lives, to answer a few questions about The October Storm.

Is there something specific that inspired the play? Real people or events?

Joshua Allen: No real people necessarily can map onto an individual character. They’re all different aspects of myself. I can be stubborn. I can be sanctimonious. I can be kind. I can be petulant. I sometimes dwell on the past at the expense of the present. So in that sense, they’re all inspired by me. How narcissistic is that?

If you were explaining the play at a dinner party, how would you characterize it?

Joshua Allen: If I were describing this play at a dinner party, I would call it a pressure cooker. There’s a sort of claustrophobia that permeates the play, especially since it all takes place below ground. And Gloria, the teenage girl at the center of the storm, will do just about anything to break free. In many ways, it’s an ensemble play. The central relationship, however, is between Mrs. Elkins, the landlady of the building, and her teenage granddaughter Gloria.

You’re a Chicago native. The play is set on Chicago’s South Side. Is Chicago a place you’ve set other plays, or do the settings of your work vary?

Joshua Allen: I have set other plays in Chicago, but not exclusively. In fact, another play of mine called The Last Pair of Earlies is going up in Chicago starting later this month at the Raven Theatre. Earlies is set in the same building, a little over 20 years before The October Storm. That play bounces around in time and space between Chicago and Mississippi.

How does the South Side of Chicago inform The October Storm? 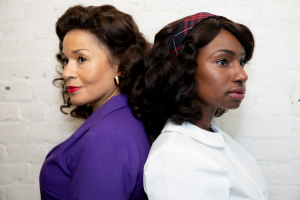 Yvette Ganier and Courtney Thomas as Mrs. Elkins and her granddaughter, Gloria, in “The October Storm.” (Photo by Rana Faure)

Joshua Allen: In some ways, it’s almost another character. It’s always abuzz with activity, and I wanted to show a different perspective on the South Side from the one we see nowadays in the media. This is an area full of middle-class professionals — doctors, dentists, business owners — who know each other and look out for each other and gossip about each other.

Was it important to set the play in the 1960s? What about that period is potent or purposeful or fascinating to you as a dramatist?

Joshua Allen: In a lot of ways, the year 1960 was still hanging onto the 1950s. But it was a year of transition. Muhammad Ali was still Cassius Clay at the Olympics in Rome. JFK was the youngest person ever elected president. It also starts what became an insanely stormy decade (pun intended) for the country and the world. And someone very close to me was born in that year, so in some ways, it’s a love letter to her.

Can you share what the title refers to without giving away everything?

Joshua Allen: I didn’t title the play until after I was done writing it. I realized that the play was set over the course of a single month in the lives of these characters, and a lot of turbulent things go on for them. And there was literal rain, so it all fell into place from there.

I know when I write plays, the message or takeaway of a play changes as I write it, or as it grows, or as time passes. What’s the takeaway of the play, for you, at the moment? What idea in the play most excites you or drives the play?

You live in L.A. Have there been long-distance rewrites during rehearsals in New York? Are you a ruthless rewriter in rehearsals?

Joshua Allen: The two plays of mine being produced right now are quite old, even though they’re world premieres, so I’m trying — trying — to stay conscious of that during the rehearsal process. I’m not the same writer I was 10 or 12 years ago, so I run the risk of doing more harm than good taking a sledgehammer to the plays. There are definitely moments in The October Storm that I sort of cringe at, but the play has to be what it is. The main challenge of working from afar, for me, isn’t necessarily rewrites, but watching rehearsals via Zoom. There’s no substitute for being in the same room with the director and the actors.

Can you share a little about the play’s development? Where has it been read, and was there a leap forward at a specific place?

Joshua Allen: I finished a first draft of the play in 2011, and had a workshop at The Lark Play Development Center in New York City in 2012. Then the play mostly retreated back into a file cabinet until Hudson Stage took a chance on it. 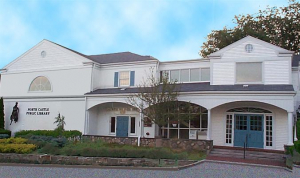 You’re a graduate of University of Southern California and the Lila Acheson Wallace American Playwrights Program at The Juilliard School. What muscle did you build as a dramatist in each program? What did you learn — or learn about yourself?

Joshua Allen: At USC, I focused primarily on acting, though I did take two playwriting classes taught by Paula Cizmar and Velina Hasu Houston, each of which took such good care of me as an insecure tiny duckling of a writer. I picked up so many tools from each of them to hone my skills developing characters. And maybe even more importantly, I learned from them that you sometimes need to leave a little room for mystery. No one is ever fully knowable, so your characters should be no different.

At Juilliard, Marsha Norman and Chris Durang were intent on preparing us for the long haul — fortifying us for careers in the theater. I suppose what I really learned from them, aside from their decades’ worth of wisdom, was self-confidence. They taught me how to have clarity about my vision for my work and to articulate that clarity to the people who I’d eventually collaborate with.

Was there a specific moment in your life when you said, “I want to be a playwright?”

Joshua Allen: I can’t pinpoint a specific moment. I just realized I was doing it and I wanted to keep doing it. I had already been doing it as a hobby for so long that any money I got from doing it professionally felt like gravy.

Was theater part of your life as a kid? Was classic Chicago storefront theater something you attended? Share a potent memory?

Joshua Allen: Occasionally we’d go see a play, or a musical, or opera as a field trip during school days. In high school, we saw a nearly all-Black cast do a production of Desire Under the Elms by Eugene O’Neill, which transfixed me. Another probably subconscious influence was the annual passion play, which was usually a touring company that would come in around Easter. You could tell the budget wasn’t huge, but that added to the magic. Live camels, the whole nine yards. You can’t beat it for sheer spectacle.

Can you point to plays and playwrights that influenced you as a writer? Whose work would you drop everything to see?

Joshua Allen: Lorraine Hansberry. Anton Chekhov. Tennessee Williams. William Inge. I’m only now starting to realize how much Come Back, Little Sheba has influenced my work. And no one can write subtext as exquisitely as Chekhov in The Cherry Orchard, or any of his other plays. I can try, but I know I won’t ever get there.