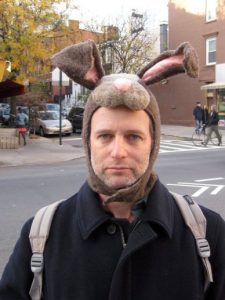 Sean Daniels, Geva’s director of artistic engagement and a Geva artist-at-large, directs Kotis’ All Your Questions Answered, playing Sept. 19-Oct. 13 in the Fielding Nextstage at Geva, Rochester’s major resident theatre. Kotis, also known for the musical Yeast Nation and the play Pig Farm, was in residence in August at the top of rehearsals and is in town for opening week. The show is billed as “an evening of short, silly, subversive, satirical plays and charming, musical numbers where hijinks ensue.”

The first five performances of the run are part of the First Niagara Rochester Fringe Festival, which includes 360 performances at various venues around Rochester. (The Fringe runs Sept. 19-28. Learn more about the Fringe here.) 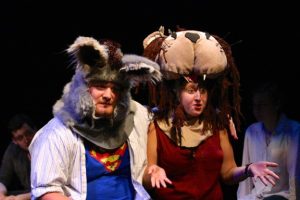 James St. Jean and Katie Ganem in “All Your Questions Answered.”

Daniels explains by email, “It’s a lot of really charming (and in his Kotis way — subversive) shorts and songs that Greg’s been putting together.” The collection is “half older material,” including work that premiered at Dad’s Garage Theatre Company in Atlanta in 2002 and shorter pieces that debuted at Actors Theatre of Louisville in 2008 and 2010. “And since then Greg has written a ton of new material to help to tie it all together,” Daniels said. “Greg is one of the few writers today writing smart satirical comedy.”

The admiration is mutual. Kotis posted this note on Facebook: “Having a production of a new piece is a miracle sort of thing, particularly when guided by the expert comic hand of Sean Daniels. What’s not to giggle?” (This just in: Daniels is attached to an untitled musical by Kotis and Hollmann about corporate greed, fast food and zombies. Here’s a short interview with Kotis & Hollmann that I wrote up for Playbill.com in June 2002, around the time of their Tony nominations for Urinetown.)

Six of the eight songs in the piece are new, written specifically for this premiere, Daniels says, adding, “One of my favorites — he wrote a song where the president in 2056 sings a songs about global warming.  It’s pretty delightful. [And he wrote] a song called ‘The Middle of the Show’ that actually takes place exactly at the middle of the show. Pretty charming.” 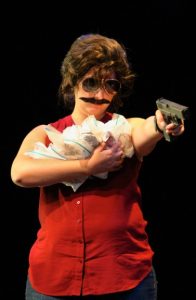 Katie Ganem in “All Your Questions Answered.”

In his director’s notes for the project, Daniels writes of Kotis, “What I adore about him is that he wants to tackle issues large in scope, but do it through the lens of comedy. He wants to write and create comedy with the same rigor and thought you would put into a more ‘weighty drama.’ The math of how jokes work. When you feel uncomfortable, because he’s gotten too close to the truth, he then has someone fall over a couch or break into song to let you off the hook….or perhaps drive his point home even more — it’s up to you to decide. This is full-on court-jester comedy. He is the Andy Kaufman of the American Theatre. …When you find those people you have to scoop them up, encourage them, and most importantly: produce them.

“So, eight months ago, I approached my friend Greg and said, ‘How about we collect your best short plays that you and I have done together, you write some more great short plays, we add in a bunch of songs and see if we can’t put together an evening that tackles, well, everything.’ Greg responded, ‘Yes, we’ll do an evening that answers ALL the questions’ — and a show, and a title was born.

“…I can’t wait until it’s done everywhere and we get to say, ‘Oh, yeah, that show, it was our idea and it started here.’ I love that our audiences will see it first and our town will play a major role in birthing a new comedy to the stage.” 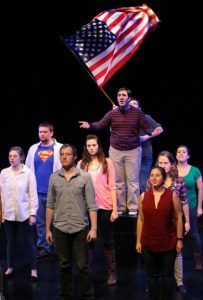 Kotis won the Tony Award for Best Book and Best Score (sharing the latter with composer Greg Hollmann) for Urinetown. His works include Michael von Siebenburg Melts Through the Floorboards, The Boring-est Poem in the World, Yeast Nation (book/lyrics), The Truth About Santa, Pig Farm, Eat the Taste and Jobey and Katherine. His work has been produced and developed at Theatre of Louisville, American Conservatory Theater, American Theater Company, the Eugene O’Neill National Theater Conference, New York Stage and Film, Perseverance Theatre, Roundabout Theatre Company, Soho Rep, South Coast Rep, The Old Globe, Manhattan Theatre Club and elsewhere. Kotis is a member of the Neo-Futurists, the Cardiff Giant Theater Company, ASCAP, the Dramatists Guild, and was a 2010-11 Lark Play Development Center Playwrights Workshop Fellow.  He grew up in Wellfleet, MA, and now lives in Brooklyn with his wife Ayun Halliday, his daughter India, and his son Milo. 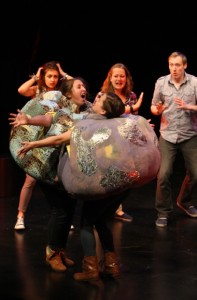 Katie Ganem and Nicole Cupo are spores battling for supremacy on a piece of toast in “All Your Questions Answered.”

This season at Geva, Daniels is also directing The 39 Steps, Mat Smart’s Tinkers to Evers to Chance and the world premiere of Deborah Zoe Laufer’s Informed Consent.

Learn more about All Your Questions Answered on Geva’s official website. 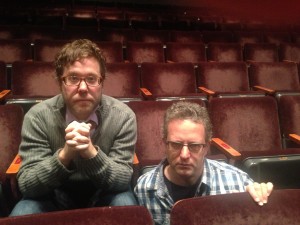