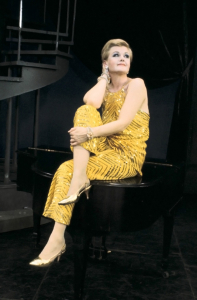 Years ago I did some work on an article I wanted to write about Jerry Herman’s five greatest show tunes. Y’know, one of those clickbait pieces where readers will either celebrate you or trash you: “Yes! ‘Put On Your Sunday Clothes’ is not just Jerry’s greatest show tune, it’s Broadway’s greatest show tune” or “How could you choose ‘I Won’t Send Roses’ from Mack and Mabel and fail to mention ‘Marianne’ from The Grand Tour?” or “How stupid are you for not picking ‘Avenue A’ from Mrs. Santa Claus?”

I made my choices and reached out to stars who had performed my picks, mostly in revivals — Lee Roy Reams, who sang “Sunday Clothes” in a Hello, Dolly! revival, responded, as did Howard McGillin, who played Mack in a London “revisal” of Mack and Mabel.

I reached out to Angela Lansbury by email (a friend shared her e-mail address with me) to ask her to reflect on “If He Walked Into My Life,” from Herman’s Mame. I never expected to hear back from the icon who won a 1966 Best Actress Tony Award for playing Auntie Mame Dennis in the musical. (She also snagged a Best Actress Tony for creating Countess Aurelia in the 1969 Herman flop Dear World, based on The Madwoman of Chaillot.) 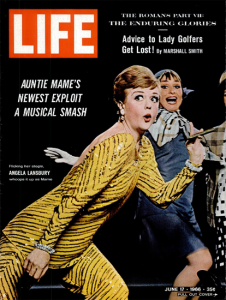 Angela Lansbury and the cast of “Mame” on the cover of Life magazine in summer 1966.

But then an email from “Angela Shaw” appeared in my “in” box. (Lansbury was the widow of actor and producer Peter Shaw, who died in 2003. Her Yahoo email address itself seemed to have a reference to Sweeney Todd in it, but I digress.)

In an email to Lansbury, I told her I picked “If He Walked Into My Life” as one of the great Herman songs because it’s a powerful, reflective number about failures and successes of parenting, and it ends with a trembling question rather than a statement or a conclusion. The character’s uncertainty is what made it drama: “Would I make the same mistakes if he walked into my life today…?” Every torch song is about longing, and Mame was longing for answers.

Mame is a book-heavy, song-and-dance-rich heavy lift for the actress playing the title character. In the famous 11-o’clock number, a middle-aged Mame Dennis reflects on raising her orphaned nephew from childhood to adulthood, and letting him go.

Here’s what Angela Lansbury wrote to me in an email on Valentine’s Day 2011, for a piece that never made it to print:

“I would have to say that ‘If He Walked Into My Life Today’ was indeed the most ‘dramatic piece’ that I ever got to perform on a continuing basis! Two years, plus the west coast tour!

“If you remember the story that unfolds during the course of the piece, for all its humor and fun, when the time comes for Mame to meet the ‘Upsons’ and Patrick’s fiancée, Mame is faced with the shocking realization that her ‘Little Boy with the bugle’ has turned out to be a huge disappointment, a snob of the first order! Yes, it is THE 11-o’clock number every actress dreams of, and Jerry Herman knew so well what the lyrics should say.

“I remember the day he played it for me the first time, in his living room of his house in the Village. I just sat there with tears streaming down my face. It took me quite a while to be able to sing this song, but as time went by I was able to drive it with the emotional energy and vocal power it needed, and I felt the audience’s response. Jerry’s lyrics said it all. I have never been able to sing it in public since.

“An interesting note is that on Jerry’s 70th birthday in Beverly Hills, Eydie Gormé and I sang together, unaccompanied, ‘If He Walked Into My Life,’ in his garden! It had been a huge hit record for Eydie…and a huge stage hit for me! That really was the last time I sang it!” 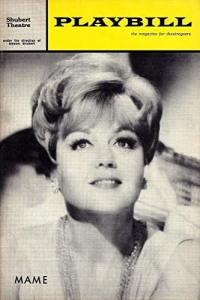 The Playbill cover of the Boston tryout of “Mame.”

Here’s Lansbury singing the song on the original cast album.

Here’s a link to Eydie Gormé singing it as a pop cover, with its intention as a torch song for a parent intact (Herman called it “the finest single recording of any song of mine”).

According to Herman’s memoir “Showtune,” Gormé heard a publisher’s demo of the song and snatched it up, and it was rushed to recording with charts by Don Costa. It was a hit concurrent with the run of Mame, and won Gormé a Grammy Award in the category of Best Female Pop Vocal Performance.

Herman revised the lyric for male singers who wanted a hit with “If She Walked Into My Life.” The verse became: “Where’s that girl with the promise?/The girl who tried to show me what love could be/Where’s that girl with the promise?/And why do I feel the someone to blame is me?” And, mid-song, more awkwardly: “Did she mind the lonely nights?/Did she count the empty days?/Was I silent? Was I cold?/Was I quick to scold? Was I slow to praise?” You can’t help but worry about the well-being of the woman who got away from this jerk.

By the way, in addition to “I Won’t Send Roses,” “Put On Your Sunday Clothes,” “I Am What I Am” and “If He Walked Into My Life,” my fifth song on that short list of the greatest Herman show tunes, for that unrealized piece, was the lesser-known Herman number that Lansbury sang in Dear World: “Kiss Her Now.” As a wizened woman who has seen the world, she urges a young man to grab at life. The song simmers and then catches fire. Like so many of Herman’s life-embracing songs, its subtext is “it’s today.”

Here’s Lansbury singing “Kiss Her Now” on the cast album of Dear World.