Marionettes Are Parents in Stephen Kaplan’s “A Real Boy,” a Tale of Puppets and Prejudice 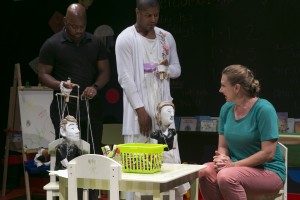 Jason Allan Kennedy George and Brian Michael as Mary Ann and Peter, with Jenn Remke as teacher Terry, in “A Real Boy.” (Photo by Heidi Bohnenkamp, 2017)

A kindergartner’s classroom behavior catches the eye of a meddling teacher in Stephen Kaplan’s A Real Boy, getting its world premiere at 59E59 Theaters in Manhattan. Turns out, young Max has special adoptive parents — they’re puppets — and the “other” nature of mom and dad raises tensions at home, at school and in the wider community in the surreal, whimsical drama that plays Aug. 2-27.

Audrey Alford directs the production in the intimate Theater C space at 59E59 Theaters  on East 59th Street between Park and Madison. Ivy Theatre Company produces in association with Athena Theatre. Marionettes and puppeteers are employed to play parents Mary Ann and Peter, while Max is played by a human child (double cast with Alexander Bello and Kelley Selznick for the run). 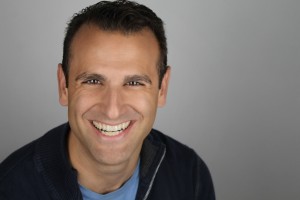 Prejudices, perceptions and being a parent himself inspired Kaplan to write A Real Boy, the playwright told me.

“When my son was younger, he was more interested in things like My Little Pony than Power Rangers,” Kaplan said. While part of me was obviously supportive of whatever he was interested in, I suddenly found a part of myself ashamed and afraid that people would think that the only reason he was drawn to these things was because he had two dads and I had to deal with this surprising internalized homophobia that came over me. It was something that I hadn’t seen or heard any other gay parents talking about so I wanted to explore it.” 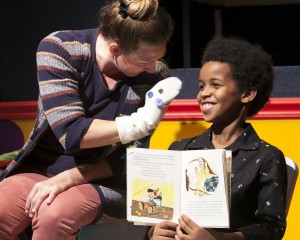 Jenn Remke and Alexander Bello as Max in “A Real Boy.” (Photo by Heidi Bohnenkamp, 2017)

Here’s how the producers bill the play: “When two puppets adopt a human child, they must deal with the fall out when the boy begins to grow strings. The boy’s overzealous (and human) teacher steps in to teach him how to be ‘normal,’ igniting a political firestorm that threatens to engulf the entire community.”

Here’s my chat with Stephen Kaplan. 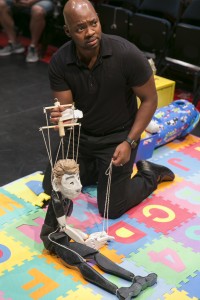 I’m always curious about the first thought that a playwright has when a play is brewing. What did you “see” first? A character? A situation? Puppets?

Stephen Kaplan: I actually started the play in a workshop at the Kennedy Center that I took with Kris Diaz (Elaborate Rise of Chad Deity). He had talked about his inspiration for Chad Deity in that he loved wrestling and was very passionate about how the media portray minorities and he fused the two together. So the exercise was to list things that we’re passionate about; mine included the Muppets and people who like to say who and what a family is — obviously I’m more in favor of the former! Then we were to write a monologue from the point of view of a character with opinions and a philosophy different from ours — and I wrote the first monologue for a character that became the teacher in my play about a kid who had puppets for parents.

Without giving too much of the play away, the teacher finds herself getting more involved with Max’s life than maybe she should — finding reasons for taking a more controlling role in his life than maybe a teacher should.

The play touches on ideas of conformity, prejudice, perceptions. What message or theme emerged most strongly for you as you were writing it, and was that idea present from the start?

Stephen Kaplan: I don’t ever tend to write toward theme but am more interested in exploring a question “What would happen if…?” I tried really hard to balance things as best as possible. I think it’s really easy to think, “Well it’s obvious that this character is wrong or misguided,” but that’s a bit easy and not really how our world is. There’s right and wrong on all sides. Our world is not black and white (though some characters in the play wish they were!) 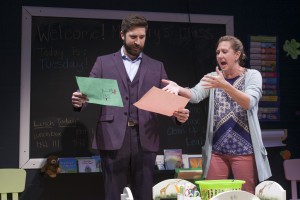 Jamie Geiger as the principal and Jenn Remke as the teacher in “A Real Boy.” (Photo by Heidi Bohnenkamp, 2017)

In addition to being a dramatist, you’re a school teacher. How does your work as a teacher inform the play?

Stephen Kaplan: I’ve been a teacher since I graduated college. Though I’ve mostly taught high school, I’ve also done my stint in elementary and middle school as well. I know what it’s like as a teacher to feel helpless when faced with a student who I thought was suffering or didn’t have the best influences in their home life. I know what it’s like to want to help every single one of my students and how I look at each of my students as my child in some respect. I did my own calculations once about the waking hours I spent with my own child and the time he spent at school with his teachers and it devastated me a bit…how I trust that his schools and teachers have his best interest at heart and are really co-parenting in their own way — as I do when I’m with my students.

Are “you” in this play? Or a character who most represents you?

Stephen Kaplan: I think there’s a bit of me in each of the characters — it’s the only way I know how to write. I think it partly comes from my acting training where I always had to find some way to play any character — to find what parts of them I connect to. When I’m writing I’m always playing each of the parts and acting them out and if I can’t make sense of them for myself, then I know something’s off with the writing. 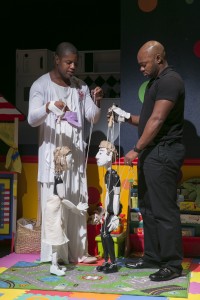 Because marionettes are in the play, voiced by puppeteers who manipulate the characters of parents Peter and Mary Ann, the play has a magical and heightened quality to it. Do you see it that way, or would you prefer for it to be played as realism?

Stephen Kaplan: The relationship between the puppet and the puppeteer is something that’s at the core of this piece and has always been the hardest thing to “unpack” when talking about it. Some want it to be clearly spelled out — this is what the puppet is and what the puppeteer is in this world. But, while I have my own thoughts about what it means, I’ve tried to not have it be as clearly spelled out because I think that some of the “magic,” as you say, disappears. There’s a definite realism in this world and some of the rules are played out on stage — puppets cannot have children biologically on their own, so they need to adopt; puppets do not eat or sleep; some humans turn into puppets and some do not — but I’ve also left a lot up to the imagination of the audience to fill in the world beyond what I’ve written.

In your script, the puppeteers are supposed to be multicultural, as opposed to Peter and Mary Ann, who are white characters dressed in monochromatic tones. What was your thinking behind that?

Stephen Kaplan: The casting in the script specifically states that the puppets are a white, heterosexual couple, but the puppeteers are supposed to be anything but — they can be same sex, multicultural, gender fluid, differently abled. The puppets represent the “typical, white-picket-fence, nuclear family” (who do still happen to be puppets), and the puppeteers represent anything that strays or deviates from that — what many say do not make a “normal” family. 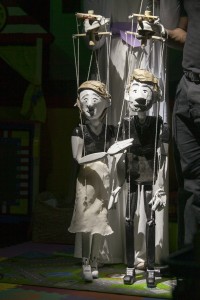 Is A Real Boy your most “surreal” play? How is it different or similar to other work?

Stephen Kaplan: There is always a touch of the surreal in all of my plays because I think that all of our lives are surreal in their own ways, though we don’t look at them as such. For example, another play of mine, Exquisite Potential, deals with parents who think their three-year-old son is the Messiah and go to their rabbi to figure out what to do — while this definitely could happen in reality, the play pushes things a bit to explore this notion. Another play of mine, Community, deals with a community theatre doing a production of Who’s Afraid of Virginia Woolf? where the actor cast as Nick is black (this was written before the recent controversy about the production in Oregon!) and the actor cast as George potentially wants to kill the Nick. Again, surreal in its own sense, but based very much in reality. While puppets are not exactly walking down the streets (as far as we know), there are many who feel like they’re hiding behind how others see them — how there are two parts to themselves — the public and the private — and the two do not always connect.

What relationship do you have with puppets?

Stephen Kaplan: I’ve always loved the Muppets. You know that question about what famous figure would you most want to meet or have dinner with or be trapped on a desert island with? For me, ever since I was little, the answer to all those is “Kermit the Frog.” I collect Kermit the Frog paraphernalia and know pretty much every Muppet movie and TV show by heart. But in writing this play, I didn’t want Muppet-like puppets but instead wanted marionettes because of the relationship between puppet and puppeteer and the artifice that we all buy into because we see the strings — we see the mechanism — and yet we still suspend disbelief. But working with puppets is a new form for me and isn’t something that I’ve really explored much beyond my own love with the Muppets (though, on a side note, my son has gotten very involved with puppets and puppet-making and is spending his summer doing a lot of puppetry work at his sleepaway camp). 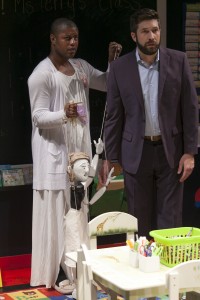 Jason Allan Kennedy George as Mary Ann and Jamie Geiger as the principal in “A Real Boy.” (Photo by Heidi Bohnenkamp, 2017)

Did you get advice from puppeteers when you were writing this, to get a sense of the practicality of the tasks you give your puppet characters? Washing dishes, etc.

Stephen Kaplan: I did some early info gathering asking puppeteers, “Can I do this?” And the answer was pretty much always, “Write it and they’ll figure it out,” which was extremely freeing. There was an initial developmental production of the play in Texas which was the first time I got to see whether or not what I wrote would work on stage and, you know what? They figured it out. And I breathed a huge sigh of relief! That was at This is Water Theatre in Texas, where I got to explore the play and workshop it with them.

This fresh New York City production plays a 50-seat space. Can A Real Boy also work in, say, a 300-seat house, or did you write it with “small” in mind?

Stephen Kaplan: I’d like to think that the play could work in any size house (what writer doesn’t want to think that!) but there is something very special about the intimacy of the audience being able to be up-close with what’s going on. But that’s something that I could argue happens with any play. Some say how huge Natasha, Pierre… is and how great it works in a huge Broadway house — but it worked just as well — only different — when it was in the tiny space at Ars Nova. Different aspects of story are strengthened or reinforced depending on the size of the theatre. At 59E59, we’re in the C space which, about 50 seats, and we’ve set it up alley style which really keeps you close to the action.