Magic to Do: Daniel Zaitchik Talks About His New Romantic Musical “Darling Grenadine” 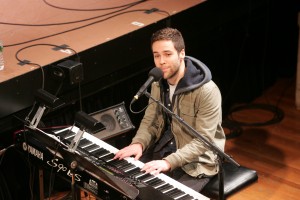 Back in May 2015, when pop and theatre singer-songwriter Daniel Zaitchik was prepping his new romantic musical comedy Darling Grenadine for a concert reading in Los Angeles, he answered a handful of my questions about the new show. Fast forward two years and the intimate, magical tuner about a commercial songwriter’s life and loves is now getting a full production by Goodspeed Musicals, Aug. 18-Sept. 17 at its Norma Terris Theatre in Chester, CT. It seemed like a good time to follow up with librettist, lyricist and composer Zaitchik.

Since May 2015, Darling Grenadine had development at the Johnny Mercer Foundation Writers Colony at Goodspeed and was selected for the 2016 National Music Theatre Conference at the Eugene O’Neill Theater Center. A cutting of the show will be presented in the National Association for Musical Theatre’s fall 2017 Festival of New Musicals at New World Stages in Manhattan. 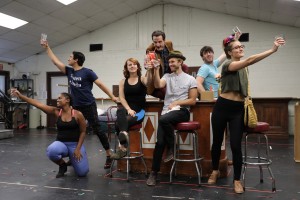 The company of “Darling Grenadine” in rehearsal. (Photo by Diane Sobolewski)

“I’ve been continually trimming and playing around with structure,” Zaitchik told me via email in mid-August, during rehearsals. “I wrote a new opening number to test out at the O’Neill last summer. It ultimately became clear it wasn’t necessary, so I let it go. In the past couple weeks at Goodspeed I’ve continued to try to tighten. I’ve also moved a tune that was in Act One to Act Two and removed another song entirely. For now! We aren’t burning any pages. I think we’ll know once we have an audience whether we miss it.”

Goodspeed’s home at the Norma Terris in Chester, CT, is a safe space for full productions of new or revised work, with no critics invited.

“I look forward to learning a lot from the audiences,” Zaithcik said. “This production is developmental, so I will continue to be editing and testing things out for the first two weeks of performances. There will be plenty of experiments. The actors will hate me.”

Here’s how Goodspeed bills the show: “Meet fun-loving jingle composer Harry. In modern Manhattan, his charmed life with girlfriend Louise, brother Paul and beloved Labrador Retriever (also Paul!) sparkles with the fizz of romantic comedies and the whimsy of MGM musicals. But will it all go flat when reality interrupts Harry’s tenderly orchestrated fantasia? A rich contemporary score explores the friction between romance and reality, bitter and sweet, high and low. Raise a glass to a musical serving something magical, moving and boldly new.” 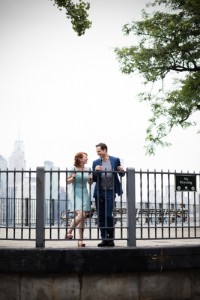 In the 2015 concert presentation of Darling Grenadine Zaitchik himself he played the lead role of Harry opposite friend and colleague Emily Walton. She returns to the project to play Harry’s girlfriend Louise, an actress. At Goodspeed, Harry is now played by Brian Fenkart. The Goodspeed company also includes Phillip Huber as Paul the Dog, Ben Mayne as Paul the Human, Danyel Fulton, Leah Sprecher, Nikko Kimzin and Kevin Zak.

“I wanted to write something for myself and actress Emily Walton,” Zaitchik told me back in 2015. “We had been singing together for years, and I was interested in shaping a show specifically for our voices and shared sense of humor. I wanted to play with telling a contemporary story with an old-fashioned sound. I had an idea of how I wanted the specific heightened world of the play to look, sound and feel. It has been taking shape over several years. It was on the back burner for a while, then the crux of the story finally clicked for me a few months ago.”

He characterized Darling Grenadine as “a singular melding of old and new, comedy and melancholy; it is an intimate, contemporary portrait told with the grandeur, magic, and fizz of a golden age M-G-M movie musical,” with “the cinematic feel” of the films “Annie Hall,” “The Umbrellas of Cherbourg” or “500 Days of Summer.” 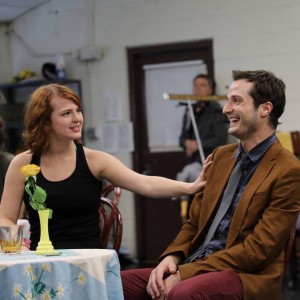 Emily Walton and Bryan Fenkart in rehearsal for the Goodspeed Musicals staging of “Darling Grenadine.”

In the 2017 Goodspeed playwright’s notes, Zaitchik writes, “I had a collection of tunes that needed a home and they had an old-fashioned, theatrical feel that didn’t quite fit with the other material I was performing as a singer-songwriter at the time. I knew they belonged to a story. I just had to find it. Before the plot formed, the spirit was clear. What I could identify was the world in which these songs lived, so I spent some time strolling around in that world. It was an offbeat, vintage universe. I was in Manhattan — gorgeous, romantic Manhattan. The Manhattan you imagine before you ever visit. I moseyed. Falling autumn leaves, falling snow. An upright piano, an upright bass. There were kazoos. Lots of kazoos. And, oh — a marionette Labrador Retriever with the voice of a trumpet. It was a colorful place full of surprises.”

He added, “The atmosphere slowly sharpened, themes emerged, and my main characters materialized: Harry, a fanciful commercial jingle writer with dreams of writing something bigger; and Louise, a fiercely smart actress understudying the lead role in a hit Broadway show. I liked these two. I wanted to get to know them.” 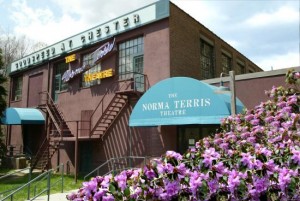 Zaitchik asks in his Goodspeed playwright’s note: “Could I take these stock characters we recognize from old tuners — the Actress and the Composer — and allow them to be substantial, multidimensional people? Could I have toe-tapping numbers at the same time that our characters are facing relatable human struggles that arise in relationships: fear, responsibility, self-sabotage? Our story is set in motion when Harry waits to meet Louise at her stage door. We learn that he struck gold years ago with a jingle he wrote for a popular burger chain. And although it seems he’s been living an easy, charmed life ever since, we begin to wonder if there might be something more complicated going on…”

Zaitchik previously wrote book, music and lyrics for Picnic at Hanging Rock, a musical inspired by the novel by Joan Lindsay. In early 2017, he won the prestigious Kleban Prize for promising American lyricist. Get tickets and more information about Darling Grenadine at the Goodspeed Musicals website.

Learn more about his music and creative projects at his official website, danielzaitchik.com. 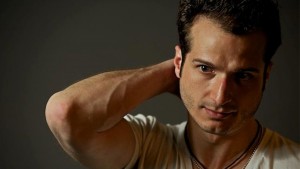 How personal is Darling Grenadine? Can you point to one character or song or tension and say, “There’s a big part of me in that”?

Daniel Zaitchik: It’s not autobiographical, but certain elements feel personal: Harry’s relationship with his dog, his relationship with music, his wavering between light and dark. There’s a tune called “New Year’s Eve” in which he grapples with the complicated feelings of regret and hope that arise in him when he watches fireworks. That one came pretty directly from my own experience. I also see pieces of myself in Louise: her sense of humor, the small things that bring her joy. She sings a tune called “Every Time a Waitress Calls Me Honey” in which she expresses how warm and fuzzy she feels whenever a waitress casually calls her “honey.” That’s just a funny little life thing that’s always made me get blushy as well. So I guess it’s these little idiosyncratic moments that make the show feel personal, even though the specific struggles these characters are dealing with are not my own.

Daniel Zaitchik: The show takes place in an alternate present-day Manhattan, where people dress more formally, and occasionally magical things can happen. You will never see a telephone or a computer, and there is not a definitive line between casual movement and dance. 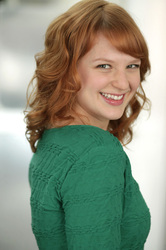 Tell me about how you and Emily Walton met, what you’ve worked on together and what is special about her. I fell in love with her gifts the moment I saw her in …Spelling Bee at Pioneer Theatre Company in Utah.

Daniel Zaitchik: Emily is special. I met her in 2007. We were both in a workshop of Saved at Playwrights Horizons. When I heard Emily sing for the first time I was struck by her authentic voice. There is nothing forced or imitative about it. I don’t think you hear that many “honest” voices in musical theatre, and so it took me by surprise. I am attracted to voices that really allow the music to be heard, rather than voices that sound like they are announcing “Listen! I’m singing!” Emily has that kind of voice, plus a self-effacing, goofy sense of humor that I relate to. At the time I was working on Picnic at Hanging Rock and I knew she’d fit in that world.  She was involved in the workshop of that show at Lincoln Center. A couple years later I started a band called Blue Bottle Collection and asked Emily to be a part of it. I quit acting after Saved, but I’d thought about writing something for us for a while — so I’m hopping back on stage for this project.

Where’d you grow up? What kind of exposure did you have to musicals? Are there some favorite foundational shows or films that influenced you?

Daniel Zaitchik: I grew up outside Boston. My family is musical.  I grew up exposed to everything from Beethoven to Gospel. Although I acted in some musicals growing up, I wouldn’t say that theatre music was my biggest influence. I felt more connected to impressionistic composers like Debussy and Ravel, and singer-songwriters who felt like storytellers — Leonard Cohen, Simon & Garfunkel, Billy Joel, etc.

My father was a writer and great lover of music and poetry. He introduced me to composers and writers that shaped who I am. In one car ride we would listen to Chopin; Peter, Paul and Mary; and Mahalia Jackson. I think the great range of music I was exposed to at a young age allowed me to feel free to do whatever I wanted with music, to make my own rules. My grandfather was a professional pianist, and my mother and brother also play. I studied acting at Boston University. 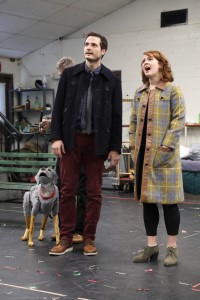 What are you influences as a musician? If someone asked the bald question, “What’s your sound?,” what do you say?

Daniel Zaitchik: This is always such a tough question. I don’t really think about genre when I write music, so I’ve always had a hard time describing my sound or knowing exactly where I fit. It’s easier for other people to tell me — and some comparisons I’ve heard have been to Rufus Wainwright, Regina Spektor, Adam Guettel and Nina Simone. I guess one of the main characteristics of my theatre music is thick layers of harmony and interweaving parts.

I love director Kristin Hanggi’s work. How did you connect with her?

Daniel Zaitchik: Kristin happened to be in the audience of a concert I performed in a few months ago, where I presented a few pieces from Darling Grenadine. She approached me afterwards to tell me the material had spoken to her. A few days later we met to talk about the project, and we both felt inspired to work on it together. 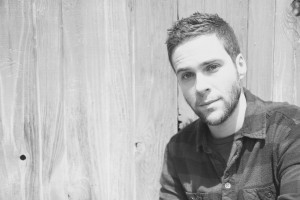 You wrote the musical Picnic at Hanging Rock. Are these two musicals worlds apart, or do they share some similarities?

Daniel Zaitchik: The shows are worlds apart in terms of time period and story — but both explore a balance of light and dark. However, Darling Grenadine is a comedy, and Picnic most definitely is not.  Both shows have an element of mystery and ask more questions than they answer — Picnic asks questions about our relationship to nature and the unknown, while Darling Grenadine asks more intimate questions about human relationships.

You live in L.A.? Where is home now and how long have you been there?

Daniel Zaitchik: I moved to Los Angeles from New York three years ago.  I’m sure I will continue to hop back and forth, but California feels like home for now.

Daniel Zaitchik: I’m working on some non-theatre songs, a screenplay, and a one-person short musical for Premiere’s 2018 installment of Inner Voices.