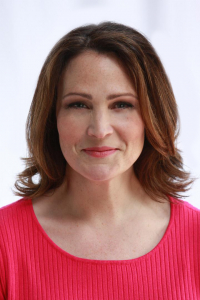 Broadway musical star Lisa Howard, whose powerful voice effortlessly glides from brassy to warm to everything in between, is in a holiday mood at the end of 2021. The actress beloved for roles in It Shoulda Been You and The 25th Annual Putnam County Spelling will perform her new cabaret show What Christmas Means To Me Dec. 12 at 54 Below in Manhattan. The gig follows the November release of her eclectic, pop-flavored Christmas album, “The Most Wonderful Time of the Year.”

Richard Jay-Alexander directs the club act, with Michael Shaieb music-directing on piano, with Alden Terry on bass, Sean McDaniel on drums, Michael Aaron on guitar and Madison Deadman and Madelaine Vandenberg providing additional vocals. Shaieb created arrangements/orchestrations on the 14-track seasonal album, which has expanded instrumentation different from the live show, available wherever you get your music — including from the FatLab label. The album is produced by Michael Shaieb and Brent Lord.

Howard’s pal from Spelling Bee, Tony nominee Derrick Baskin, who played comfort counselor Mitch Mahoney in that 2005 musical, is also heard on the new album. He was Tony- and Grammy-nominated for his role as Otis Williams in Broadway’s Ain’t Too Proud — The Life and Times of The Temptations.

Get tickets to What Christmas Means to Me at 54 Below here. 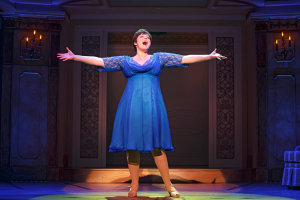 Lisa Howard in Broadway’s “It Shoulda Been You,” for which she snagged a Drama Desk Award nomination. (Photo by Joan Marcus)

Drama Desk Award nominee Howard appeared on Broadway as Tammy in Escape to Margaritaville; as Jenny Steinberg in It Shoulda Been You; as Diva 1 in Priscilla, Queen of the Desert; Missy Hart in 9 to 5; and Rona Lisa Peretti in The 25th Annual Putnam County Spelling Bee, among other gigs in concert, on tour and regionally. Her solo CD, “Songs of Innocence and Experience” is available on iTunes. Howard is a graduate of the Cincinnati College Conservatory of Music.

For more information about Lisa Howard’s work, visit her website.

I love the eclectic nature of the new album — a mix of traditional, rock and pop-flavored holiday songs. What did you “see” when you first envisioned the album? Did you have a hard time choosing material?

Lisa Howard: I knew that choosing songs would be very challenging because of the overwhelming variety and amount of different Christmas songs out in the world. Knowing that I would do a live performance of the album in the future, I actually developed the concept of the show first to help us choose the songs [for the album]. Based on my love of Christmas movies, I listened to a bunch of holiday songs and put them in different dramatic categories. For example: an intro song; a traveling song; a falling in love song/romantic song; a conflict song; a resolution song. And once I put songs into these different categories I was able to choose from a much shorter list of songs. It really helped! And it didn’t matter what style they were. They just had to fulfill a dramatic purpose. 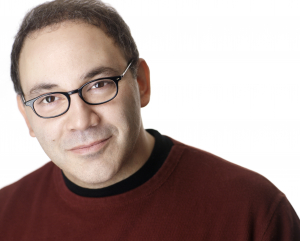 I dig the arrangements by Mike Shaieb. “Sleigh Ride,” for example, has an especially fresh, infectious beat. How did you and Mike know each other, and what were your conversations about the album?

Lisa Howard: I love Mike’s arrangements, too! I love how he made them feel fresh and new and unique. We have known each other for over 20 years and have collaborated on so many different types of projects, from musical theater demos, to voice overs, to theme park shows. We actually recorded a mini Christmas album —five to six songs — as a gift for my parents back in 2004! During the pandemic we decided to make one for real! We had thrown the idea around for a while but since everything was shut down, we actually had the time to work on it. So, we started making our list of potential songs and started developing the show concept in February/March of this year. Mike had written the song “The House Where I Grew Up at Christmas” years before and I knew we had to do that one! It’s the only original song on the album. Mike started creating the arrangements in the spring and once we were all vaccinated we began recording in May/June. We finished recording in August and then Brent Lord went to work mixing and mastering in September/October. It was really a fun process.

I love that Joni Mitchell’s “River” appears on the album. Does it have a special meaning for you?

Lisa Howard: I discovered Joni Mitchell’s “Blue” album when I first moved to the city and I listened to it over and over. I loved the whole album, and especially “River,” so when choosing the songs for the album, it was a great “conflict” song and was an easy choice to put in the album. I especially love “I’ll Be Home For Christmas/Home for the Holidays” because I whistle on the track! I just love the sentiment of these two songs and I love how we combined them.

Where’d you grow up and what were holidays like for you? Where are you spending the holidays this year?

Lisa Howard: I grew up in Akron, Ohio. I have two older brothers and many fond memories of Christmases at home. We would go to my grandparents’ house Christmas Eve to celebrate with my dad’s family. My mom’s parents would spend Christmas morning with us. We had to wait till they came over to open presents! As a kid it was so hard to wait, so my mom would let us open our stockings while we waited. This year my family will head to my sister and brother-in-law’s place in south Jersey for Christmas Eve and then we’ll drive to Ohio after Christmas Day to celebrate with my family.

What was the Christmas music that you grew up with? What music did your parents like compared to what you liked? Was church music part of your world?

Lisa Howard: My mom listened to Barbra Streisand’s Christmas album, as well as The Carpenters. So of course that’s the Christmas music I love, too. And yes, growing up Catholic, Christmas hymns/sacred music was a part of my musical influence, but they didn’t make it onto my very secular Christmas album. 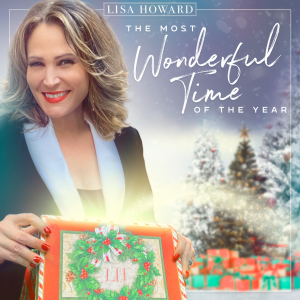 The album cover of “The Most Wonderful Time of the Year,” released Nov. 20.

Is there anything in the 54 Below show that isn’t on the album?

Lisa Howard: Yes, the show is different than the album itself. In the show, the songs are in a different order and some of the Christmas songs have been replaced with some favorite Broadway show tunes.

Derrick Baskin of Broadway’s Ain’t Too Proud shows up on your album! You’ve been pals since Spelling Bee?

Lisa Howard: Yes! Derrick and I met while doing Spelling Bee and he is still one of my favorite people to sing with! So when I needed someone for a couple of songs on the album, he was my first choice! I love the depth of his voice and his musicality and he’s just an all-around good guy. I’m really proud of him for all his success. He was spectacular in Ain’t Too Proud.

What’s coming up for you in 2022?
Lisa Howard: In 2022, I’ll be hitting the road as Madame Morrible in the national tour of Wicked. I’m really looking forward to being back in a show! I will also be seen as Mrs. Henry Schermerhorn in the new Julian Fellowes [HBO] show “The Gilded Age.”  The series premiers Jan. 24, 2022.