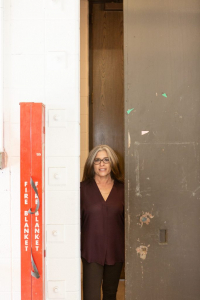 Ellen Simon, daughter of the late great playwright Neil Simon, will finally see the world premiere of her play, Ass, starting Oct. 22 in a production by Pioneer Theatre Company. The drama about a famous sculptor and his family was among countless  titles cancelled or postponed around the world in March 2020 when the COVID 19 pandemic hit. The set was built, the actors were rehearsed, and Simon — a screenwriter and playwright with her own credits — had been on site in Salt Lake City. But then it all shut down.

Ass was developed in PTC’s Play-by-Play reading series in 2018. According to the resident Equity company in Salt Lake City, the play “tells the story of a brilliant sculptor of world renown who is confronted by his son and his ninth wife as he deals with his own mortality.” It’s billed as “a witty and engaging look at a family who can’t help but behave badly.”

Director Karen Azenberg (Pioneer’s artistic director) and Simon are lifelong pals owing to the close relationship of their fathers. Azenberg’s dad, Emanuel Azenberg, was Neil Simon’s longtime producer responsible for giving a spotlight to Simon smashes The Sunshine Boys, They’re Playing Our Song, Brighton Beach Memoirs, Biloxi Blues, Broadway Bound and Lost in Yonkers. Manny Azenberg received the 2012 Tony Award for Lifetime Achievement in the Theatre and continues to be general management consultant for a new generation of theater executives at Baseline Entertainment. 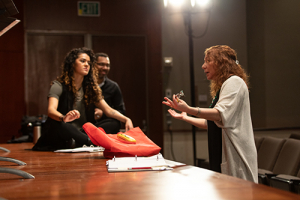 Playwright Ellen Simon wrote the screenplays for “One Fine Day” and “Moonlight and Valentino,” and worked on the script for the movie “How to Lose a Guy in Ten Days.” Her plays have been performed as part of the Duke Broadway Preview series, at Stages Repertory Theatre and at Pasadena Playhouse. She also wrote for the TV series “thirtysomething.”

In production notes for Ass, Ellen Simon wrote: “So, the title. You may be wondering if I am applying an admittedly in-your-face label to someone in particular? To a certain character in the play maybe, or to someone from my own life? It could simply refer to a sculpture emerging in stone. But as I myself do come from a complicated family, let’s start there.”

She added, “Our communication was admittedly patchy at times, even though we are mostly all writers, and usually pretty good at expressing ourselves. Is there a play somewhere in there, I thought? Maybe they aren’t writers. That seemed too close for comfort and probably annoying to watch. Like paint drying. Paint? Maybe one’s an artist? A great artist who sculpts body parts? Which body part? Oh. That could work, if I dare.”

Simon began writing Ass “around fifteen years ago, wanting to move away from romantic comedies, to try something intimate, theatrical, and thematically deeper,” she wrote. “I thought of my own playwright-father’s advice to 1) write what you know, and 2) make sure there is conflict. I also thought about my favorite plays, all family-based stories, and so fashioned a family completely different than my own, while also being quite similar in how they behave badly.”

There’s an illuminating interview with Simon and Azenberg in the Salt Lake Tribune.

Performances of Ass continue to Nov. 6 at PTC’s Simmons Pioneer Memorial Theatre on the campus of the University of Utah in Salt Lake City, UT. Visit pioneertheatre.org. 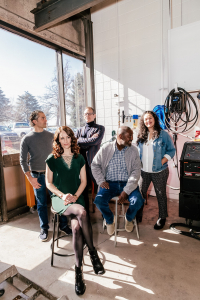 The actors originally cast for the 2020 production are returning, as is most of the design team. According to PTC, “A major set piece for Ass, a warehouse portal designed by scenic designer Jo Winiarski, has been sitting on the stage for the past 560 days since production shut down, and was even incorporated into PTC’s 2021 season opener Ain’t Misbehavin’.”

The cast features T. Ryder Smith Jule Waterman, “the contentious father whose genius has inflated his ego to massive proportions”; Ben Cherry as “the underachieving son who will always be compared to one of the greatest artists of the century, his father”; Elizabeth Ramos as “Will’s sunny wife, Ana”; Laura J. Hall as “Jule’s ninth wife, Tory”; and Vince McGill as “Jule’s kind dialysis nurse, Ray.”

This is Karen Azenberg’s tenth season as artistic director of PTC. This is her third world premiere directing project there following Kenneth Jones’ Alabama Story (now published by Dramatists Play Service after 40 productions since PTC in 2015) and Jeff Talbott’s i (produced in 2018), both of which originated as Play-by-Play selections. She also directed the Utah premiere of The Play That Goes Wrong, as well as the regional premieres of Oslo and Sting’s The Last Ship.

This is the first of two world premieres by Pioneer Theatre Company in the 2021-22 season. Jeff Talbott’s The Messenger, inspired by Henrik Ibsen’s An Enemy of the People, was to have premiered in the 2020-21 season, and will finally surface there Jan. 14-29, 2022. Wes Grantom directs.