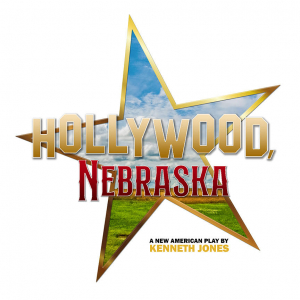 Kenneth Jones’ six-actor comedy Hollywood, Nebraska — the story of two actresses returning to their dying hometown — is getting at least three “rolling world premiere” productions by American theater companies in the 2022-23 season. It’s also available for licensing in future seasons.

The contemporary play about small towns, big dreams, moving away and coming home is a feast for four actresses who are eager to play complex, tough, aspirational characters: two women in their forties who left town years ago, a senior woman who stayed, and a star-struck teenage girl who wants out. They’re abetted by two blue collar men — fiftyish and thirtyish, respectively — in a world that’s bittersweet, funny, sexy, hopeful and homespun. 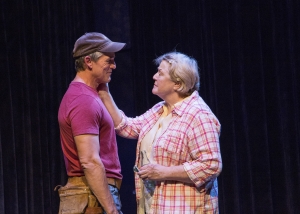 Dean Biasucci as neighbor Robert and Nora Chester as Alma in the Wyoming Theater Festival workshop of “Hollywood, Nebraska.”

Here’s how Hollywood, Nebraska is billed:

“In the Great Plains of Nebraska, two actresses of a certain age are returning to their dying hometown. Jane’s in from L.A. to check up on her ailing mother. Andrea’s back from New York to bury her father. Can childhood friends overcome past hurts to find hope in a place they left behind? Fall in love with a new American comedy about the urge to be creative, the itch to move away and the power of coming home.” 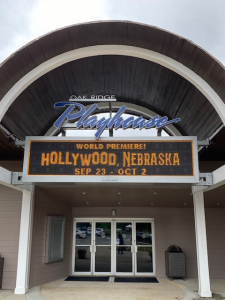 The marquee of the historic Oak Ridge Playhouse.

The playwright was in residence for rehearsals in Oak Ridge, TN, revising the script, directed by artistic director Reggie Law. Script changes were sent to Lamb Theatre artistic director Russell Wooley, who incorporated them into his concurrent production. In 2023, Wetumpka Depot Players in Alabama will stage the most refined version of the script.

The playwright shared, “The invitation to be in residence in Oak Ridge allowed me a close look at the rehearsal process and the script in action, prompting me to defend, explain or rewrite parts of the play. This is how new plays are built. I feel like this is a new and very welcoming artistic home for me, with gifted actors. At the end of my five-week residency in Tennessee, I will leave with a sharper script. The strategy of three distinct productions with three different directors is an extraordinary opportunity for a playwright to grow a play.”

A free perusal copy is also at NewPlayExchange.org. 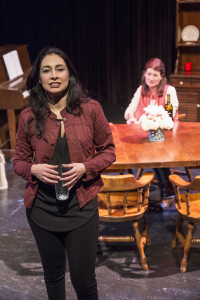 Michelle Jasso as Andrea and Elizabeth Howell as Jane in the Wyoming Theater Festival workshop of “Hollywood, Nebraska.”

“I’m thrilled to see an expanded launch and life for my valentine to showbiz personalities, the Midwest and the urge to be creative,” Jones said. “Hollywood, Nebraska is comfort food with a salty edge — and it even has a few musical surprises embedded in it.”

“I’m honored that companies are taking a risk on an unpublished play — I’m lucky to get to grow the script through conversations with directors in rehearsals for these three productions,” Jones said. “I think the universal idea of ‘coming home’ is one of the reasons why the companies embraced the play. After the worst days of the pandemic, audiences are coming home to theaters again. And they want comfort and nourishment and hope.” 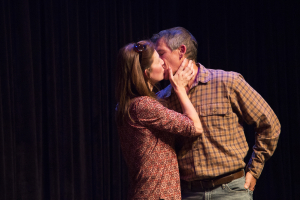 Elizabeth Howell as Jane and Dean Biasucci as Robert in the Wyoming workshop of “Hollywood, Nebraska.”

Off-Broadway’s TACT/The Actors Company Theatre gave the play its first reading. It was later seen in a full workshop production at Wyoming Theatre Festival, not far from the Nebraska town that inspired the story. The play is set in the recent past in the 2000s, in a “kinder time.”

The two-act modern-dress play is a love letter to small towns, theater people and the creative spirit in everyone. Scenically, it requires only pieces of furniture for a unit parlor/dining room set, with a neutral playing area to suggest other locations.

Playwright Jones said, “I’ve been lucky to witness readings of the play, and to see audiences connect with that universal idea of ‘coming home.’ Unlike my play Alabama Story, this new play is more interested in family issues than social justice issues: You should expect a tears-and-laughter experience from Hollywood, Nebraska. In the time of the waning pandemic this is a feel-good, comfort-food play that will — I hope — make audiences think about who they are, what they once wanted, where they came from and what they became.” 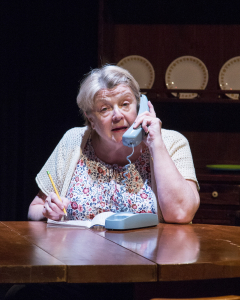 Here’s how the playwright explained Hollywood, Nebraska in an earlier playwright’s note: “There’s a small town in far western Nebraska where I have spent time, as an outsider, with people I love. Its heyday is over. Its population has dwindled to about 2,400. There is drought. Some storefronts are boarded up. There are farms both fallow and fertile. Missile silos that once held weapons aimed at Russia during the Cold War have been decommissioned. An oil boom ended. A railroad cuts through town, but it no longer offers passenger service. Interstate I-80 diverted traffic away from Main Street — the old Lincoln Highway — a long time ago. When I visited there, I walked around town. I browsed at a thrift shop. I took pictures of broken windows at the Wheat Growers’ Hotel. I attended a church service. I shared dinners and played cards in a parlor with widows who loved to laugh and talk about their history. I was curious and inspired. I wondered about residents past and present — who left? who stayed? and why? — and it all made me think more deeply about what it means to lead a so-called creative life. That was the jumping off point for my writing Hollywood, Nebraska.” 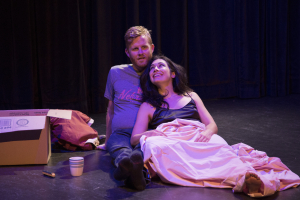 Joseff Stevenson as Lance and Michelle Jasso as Andrea in the Wyoming workshop of “Hollywood, Nebraska.”

For those looking for comparisons, Hollywood, Nebraska has the feel of Broadway Bound, Steel Magnolias and The Rainmaker. The playwright explained, “Crisis points in the lives of these characters force them to look in the mirror and examine who they were, who they are and what they want.”

Here’s the character breakdown for the modern-dress play:

The playwright encourages culturally diverse casting except for the roles of Jane and Alma — the mother and daughter are white folks, whose roots go back to European people who settled the Midwest in the 19th and early 20th centuries.

Jones’ three-character comedy-drama Two Henrys, about a Midwest native reconnecting with his late partner’s family in Florida, recently had a reading in May by Actors Theatre of Indiana. You can find also find the script at New Play Exchange.