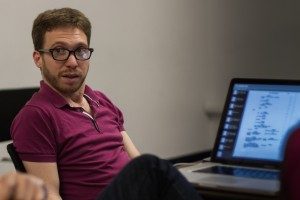 Playwright-director Michael Perlman, whose “At the Table” is making its world premiere Off-Broadway.

The safety of a past artistic home and the trust of familiar collaborators are two important table legs in the creation of the new ensemble drama At the Table, the latest project from Off-Broadway’s Fault Line Theatre and playwright-director Michael Perlman. It began June 13 at HERE Arts Center, where it continues to July 19. If you have any affinity for the sensitive, politics-and-personality-punctuated ensemble plays of Lanford Wilson (say, Fifth of July) or Terrence McNally (say, Love! Valour! Compassion!), and if grassroots independent theatre is a passion, this is an essential new play for you to experience, from a rising voice of a new generation and an ambitious young company.

Maybe you saw the feature I wrote about this production for TDF Stages magazine. I wanted to share more of my chat with director-playwright Perlman. Check it out below. 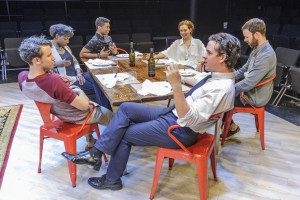 The making of the new humor-laced play about culturally eclectic friends in their thirties who take stock of themselves at a country house in a time of (current) societal shifts mirrors the developmental process of Perlman’s From White Plains, an earlier (acclaimed) production by Fault Line. Both plays were grown from the ground up, starting with an idea and a few pages. A full script later blossomed in workshops and rehearsals, in the company of artists who had come of age together in college.

“We set an opening night when I had just an idea,” Perlman says of From White Plains, his GLAAD Media Award-winning drama about the public fallout of a high school gay bullying experience, which Fault Line produced in 2012-13. “After I wrote just part of the first scene for At the Table, Fault Line applied to HERE Arts Center and booked the space.” (It’s at HERE’s 99-seat Mainstage.)

The playwright and Fault Line co-artistic directors Craig Wesley Divino and Aaron Rossini (who also appear in the new play) are alumni of Brown University’s graduate theatre program; the cast members have connections to Brown, too. 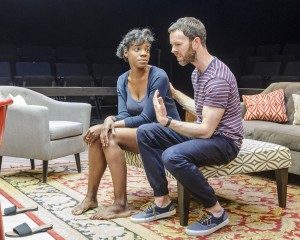 Rachel Christopher and Jimmy King in “At the Table” at HERE Arts Center. (Photo by Jacob J. Goldberg)

Here’s how Fault Line bills the play: “What happens in a changing America when those at the center of the conversation suddenly find themselves on the periphery, and those who have been marginalized begin to have their voices heard? At the Table tells the story of a diverse group of friends on their annual retreat away from the city. Expecting good times and casual conversation, as liquor flows and tongues loosen, what emerges is a struggle to define their own identities. No subject is taboo and no issue is safe. While exploring who they believe themselves to be, they discover how others see them and where they stand in the ever-changing landscape of 21st century politics.”

The cast includes Rachel Christopher, Craig Wesley Divino, Claire Karpen, Jimmy King, Ben Mehl, Aaron Rossini, Jude Sandy and Stacey Yen (who was so good in Naperville, a play that I profiled for TDF Stages and on my website). 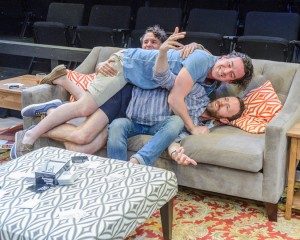 Aaron Rossini (seated), Jimmy King (below) and Craig Wesley Divino (on top) in “At the Table.” (Photo by Jacob J. Goldberg)

Visit www.here.org for tickets. If you’re a TDF member, discount tickets have appeared at TDF.org. Fault Line operates on a transitional Off-Broadway contract, with a top price of $29 (there’s a $5 discount with a valid student ID). HERE is at 145 Sixth Avenue at Dominick, one block south of Spring Street. Performances play Wednesday through Sunday at 8:30 PM (as well as 4 PM July 12 and 19).

Here are excerpts from my chat with director-playwright Michael Perlman.

At the Table was written and workshopped over the past 18 months and further shaped in the rehearsal period for the current production. Given the intertwined, intimate relationships of the characters (and your shorthand with cast members, most of whom you have worked with), how important were questions from the actors and how important was it for you to divorce yourself from the cast and look at it all as objectively as possible, as a director-writer?

Michael Perlman: It’s a complete meeting of questions from the actors and looking at it as a director and writer. Because I’m writing and directing it, which has its benefits and negatives, my primary collaboration is with the actors, so I am relying on them so much to spark the conversation, and to ask questions. (We have a wonderful dramaturg, Jill Rafson, but she [wasn’t] in rehearsal every day). One thing that I like to do is go around and ask them “what scene they want to see?” or “what combination of people do you want to see?” At the very least, it starts my brain going as to what that scene could be. It helps me get over the hump of writer’s block whenever I have it. And then a lot of it is also me just watching and trusting my instinct. 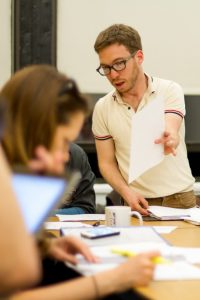 Your original setting of Act Two was a city restaurant, where the friends from Act One’s lake house reunite. You changed that late in the game, in the weeks leading up to first preview. It’s now all set in a lake house, with the second act about a year later.

Michael Perlman: I was having a lot of trouble writing Act Two at the house, which is where I was originally planning to set it, and leaving for the restaurant allowed me to write and see who these characters are in a different setting, which helped me hear their voices better. But my brain [was] saying, “I’m not ready to leave the country house. I thought I was, but I’m not.” And I adjusted from there.

These people are still in flux, still figuring out how to define themselves.

Michael Perlman: Our generation is faced with so many more choices and so much more information. In some ways that’s such a gift. But it also leads to a lot more anxiety and existential crises because you always feel like you’re going to make the wrong choice.

The cast is made up of actors you knew from college — Brown University, where you earned undergrad and grad degrees in theatre. How did that trust aid in your storytelling process?

Michael Perlman: [Without them] there would have been a longer period of getting to know everyone — a longer period of knowing who to go to for feedback. My job is to hear the note behind the note. Knowing people allows you to know the note behind the note almost immediately. If they’re asking about one thing, what they’re really not feeling good about may be this other thing. So much of the new play process is living in the unknown. Particularly as a writer and director, having actors who trust me makes a huge difference — that even when I don’t know something, we’ll be working together to get there. [It takes] the pressure off me to have to pretend that I know things I don’t know.

Sounds likes the way you make theatre is something of a democracy.

Michael Perlman: It’s not a democracy, but everybody gets a voice. 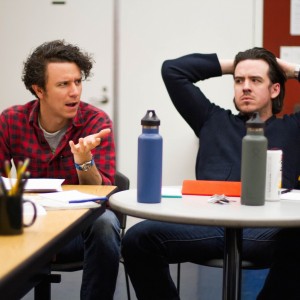 You set the play in a country house, but it’s not owned by any of these characters. It’s owned by the parents of one of the characters.

Michael Perlman: These aren’t adults yet. Nate [played by Aaron Rossini] has kids, so he’s the closest, but in some ways they’re playing “pretend.” There was talk about making a change in Act Two — that maybe by Act Two Nate’s parents have died, so it’s now his house, but it felt like that would be hanging over the place so much.

The shadow of Chekhov hangs over the house. Were the country-house plays of the Russian master an influence?

Michael Perlman: Absolutely. I directed Uncle Vanya as my thesis in grad school. It’s one of the favorite things I’ve done. He was asking what happens to people at a time of change. Sometimes in his plays it seems like nothing is changing but the amount of anxiety that produces is because you know something has to change, there’s change coming, and you don’t know what you’re going to do. 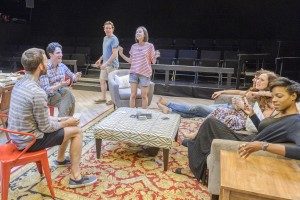 What do you admire about his work?

Michael Perlman: How personal and political he was; the ways he blended humor and pathos; when characters who are in extreme pain allow you to laugh. Also the way he structures his plays in terms of people arriving and people leaving — that is something I looked to when trying to figure out what this play is.

So, is Chekhov why you set the play in the country?

Michael Perlman: Partly. I’m really lucky that my parents have country house. There’s something about being isolated from the city, being out of your lives, and the ways in which we’re different people when we’re together all the time as opposed to just for a dinner: It’s so hard in New York to do actually nothing together, and I think it’s in the doing nothing that the most questions come up. It was important to me that it was someone’s parents’ house; and that there is this “playing house” quality to it. Taking ownership of a place that’s not yours and trying it on.

To stand on a foundation that’s not your own?

Michael Perlman: Yeah, and wonder if it’s the foundation you want.