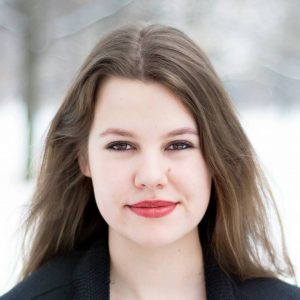 The Summoning, playwright Charlotte Ahlin’s darkly comic new play about three college-age women toying with the occult as they stand on the brink of adulthood, gets a staging in SheNYC Summer Theater Festival July 14-15 at the Connelly Theatre in the East Village. Fat Knight Theatre produces the play. Check out my Q&A with the playwright below.

Emily Lyon directs a cast that features Caitlin Cisco, Colleen Litchfield and Jacque Emord-Netzley. The stage manager is Taylor Elise Keller. The Connelly is at 220 East Fourth Street. The Friday performance is at 6 PM, the Saturday show is at 2:30 PM. Tickets are $15.

Here’s how Fat Knight bills The Summoning: “Circe and Morgan are college roommates, and tonight they’re planning something strange. All they need to set their dangerous plan in motion is that final touch: a virgin vessel. Enter Lily, the last virgin on campus…” 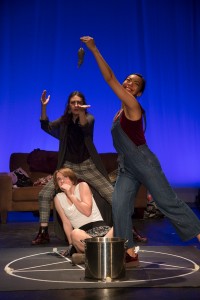 The cast of “The Summoning” in SheNYC Festival.

Playwright Ahlin told me, “Circe and Morgan have invited Lily over under false pretenses. They need a virgin vessel, and she fits the bill. For the first half of the play, Circe and Morgan are trying to casually ease Lily into being a willing participant in this summoning ritual, but Lily is increasingly freaked out by little things like the dead rat in the freezer, or the pentagram on the floor. Alliances shift, secrets are revealed, tampons are hidden in inadvisable places. As for what happens once the actual summoning is underway, you’ll just have to come and see for yourself.”

She added, “Circe wants to summon an ancient deity of some sort so that she doesn’t have to find a post-grad job. Morgan wants to have a crazy fun college story to tell about that time they tried to summon a demon. Lily just wants to have female friends. I like to think that all three share the play, or that Circe and Morgan take turns as the main character. Or at the least, Circe thinks that she’s the main character, and she may or may not be right.

Charlotte Ahlin (pronounced “ah-leen”) is a writer, actor, artist and born-and-bred New Yorker. She recently graduated from Oberlin College with a degree in creative writing. Currently, she writes for the books section of Bustle.com, and one of her short comics is featured in the new science fiction anthology, “All the King’s Men.” She is also a founding member and associate artistic director of Fat Knight Theatre, a nonprofit theatre company with a recent, award-winning run at the NYC Fringe Festival and Fringe Encore Series. She is a member of the 72nd Street Gang playwriting group. 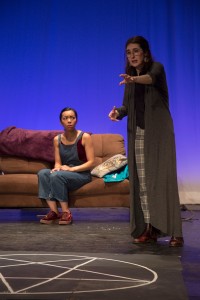 Caitlin Cisco and Colleen Litchfield in “The Summoning.”

The Summoning was seen in a January developmental staging Winterfest Theater Festival. The SheNYC script reflects revisions since that time.

Charlotte Ahlin answered a handful of my questions about her smart, funny, unsettling play, which I first encountered in meetings of the 72nd Street Gang playwriting group.

Take me back to when you first conjured The Summoning. What inspired it, or what did you “see” first? A character? A situation?

Charlotte Ahlin: The first thing I “saw” was the relationship between the two roommates. In my senior year of college, as graduation was fast approaching, so many pairs of best friends were fighting, or desperately clinging to each other, or drifting part. It’s like how a lot of people fight with their parents right before moving out. You love this person… so you push them away, to make the separation hurt less. I wanted to capture that strange, intense moment in time. And then I thought, why not add demons?

Did it always have a supernatural element? What attracted you to that, or what inspired that?

Charlotte Ahlin: The very first draft (or rather, the primordial sludge that eventually became the first draft) didn’t have the supernatural element. And it was terrible. I scrapped everything and started over, and this time I gave myself permission to go with all of my silliest impulses. That worked much better, especially because it gave me the excuse to write slapstick involving a bloody tampon.

As for what inspired it, I’ve always been drawn to mythology. We understand the world through stories, and “the unknown” of the occult as a metaphor for the uncertainty of the future came naturally. Besides, the otherworldly power of a close female friendship can only be expressed onstage through arcane magics.

Did you start writing the play in school? How has it changed or grown?

Charlotte Ahlin: I started writing The Summoning in my senior year of college. Then I left it alone for a while to ferment. Several months ago I came back to write a second and third draft, and now I can barely remember what the first draft was about. Certainly, all of the pre-graduation anxiety has been in the play since the beginning. The so-called supernatural elements have changed quite a bit, as well as the relationships between the characters. It was helpful to step away from the script for a couple of months, catch up on sleep, and then come back to it once I was out of college.

You’re in your twenties, not long out of college. Are these characters — or their goals — based on real people and passions, emblematic of cultural types?

Charlotte Ahlin: Some bits and pieces of real people and real passions have made their way into the characters. I wouldn’t say that they’re emblematic of cultural types, but all of the characters are definitely trying their hardest to fit into certain types, with varied success.

Or, maybe the other way to ask it is: The play seems to take the pulse of the aspirations of college-age women. Was that a goal?

Charlotte Ahlin: The three women don’t represent different things in my mind, although they are all grappling with different approaches to feminism. And I’ll give bonus points to anyone who can tell me the three witches they’re named after.

What muscle did you build as a writer in Oberlin’s creative writing program? You got a BFA?

Charlotte Ahlin: Just a BA, actually! Writing is not a fine art, apparently, it’s just an OK art. My focus was fairly broad, from fiction to nonfiction to playwriting to graphic novel. The most important thing I learned was how to edit, how to give feedback, and how to accept feedback. That’s been crucial. And it’s a fairly competitive program, so I had to learn to stop comparing my writing to everyone else’s. Just because you’re not writing a screenplay about a dysfunctional family in which sad people take drugs, it doesn’t mean that your writing isn’t serious.

You were raised in Manhattan by parents who are actors and writers — Jean Tafler and John Ahlin. Was it predetermined, somehow, that you would be a theater person, or are there other paths you are on? Do you secretly want to be a veterinarian?

Charlotte Ahlin: It never occurred to me to not be a theatre person. I saw my first Shakespeare play at two weeks old, and I spent a lot of my childhood hiding under people’s dressing room tables. My childhood would have been unbearable if I didn’t develop an all-consuming love for theatre. Plus, I was a shy, dramatic, chubby child with a loose grasp on reality, so I think I would have been drawn to theatre no matter what.

So theatre will always be a huge part of my life. But I also write some things that aren’t plays, and I draw comics. I could never be a veterinarian, though. I’m scared of needles.

Did you ever have “the talk” (or talks) with your folks about you going into the business? Share what that was like?

Charlotte Ahlin: No, we never talked about it. Someone was always running late for rehearsal, so we never had the time. My parents were always glad to see that I was more focused on writing than acting, though. They consider writing to be a financially stable career.

You watched your parents act in plays for years. Were you a child actor? Have you performed with them?

Charlotte Ahlin: I acted in school plays, but I was not a professional child actor. My parents took me to auditions at first, but when I turned two I put a stop to it. All that rejection can really wear you down, as a toddler. I decided to be a writer instead by age three. But then in sixth grade I flip-flopped and decided to start acting again, because I wanted a bigger role in our original school musical about Pompeii. So no, I’ve never performed with my parents in a play. I’ve produced plays with them, and that’s more than enough family bonding for now.

What’s coming up for you, creatively?

Charlotte Ahlin: I write for the books section of Bustle.com, so that’s ongoing! I also recently had a short comic published in the science fiction anthology, “All the King’s Men.” Up next, I’m in the planning stages of another full length play and a more involved comics project, so stay tuned!

Check out my earlier piece about the Fat Knight production of ChipandGus, a 2016 NYC Fringe festival hit written by and featuring John Ahlin and Christopher Patrick Mullen.