Cast and Creatives Announced for “Alabama Story” at Repertory Theatre of St. Louis 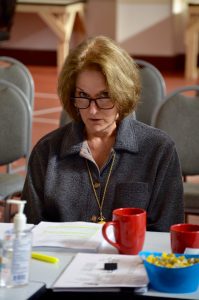 Jeanne Paulsen in rehearsal for The Rep’s “Alabama Story.”

The early 2019 run marks the 60th anniversary of the real-life controversy that inspired the six-actor social-justice play set in “the Deep South of the imagination.” When the Civil Rights movement was catching fire in Montgomery in 1959, politicians sought to purge from state libraries books that they perceived as favoring racial integration — including Garth Williams’ whimsical children’s picture book about a black rabbit marrying a white rabbit. 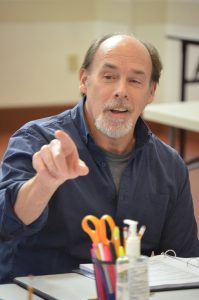 Carl Palmer in rehearsal for The Rep’s “Alabama Story.”

State librarian Emily Wheelock Reed (played by Jeanne Paulsen, a Tony nominee for The Kentucky Cycle) became a target — and an inadvertent Civil Rights hero — when she stood between a book-burning state senator (played by Louisiana-based actor Carl Palmer, of “99 Homes,” “Treme” and “Dallas Buyers Club”) and the innocent book “The Rabbits’ Wedding.” Their battle over the message of the book and its appropriateness in Alabama libraries in a time of racial segregation made international headlines.

The play friskily positions author and illustrator Williams (played by regional theater veteran Larry Paulsen) as a kind of narrator and interloper, assuming multiple roles (political crony, newspaper reporter, conservative columnist) in a script that the playwright once said was “a mashup of political thriller, social-justice drama, memory play and romance, with dollops of surprising humor.”

Here’s how The Rep bills Alabama Story: “A determined librarian and a segregationist senator face off over an innocent children’s book in 1959 Montgomery. Depicting the marriage of two rabbits — who happen to have different-colored fur — the story has Sen. E.W. Higgins calling for a book ban. But even as the pressure mounts, librarian Emily Wheelock Reed refuses to yield to censorship. Inspired by true events, Alabama Story is a stirring testament to free expression.” 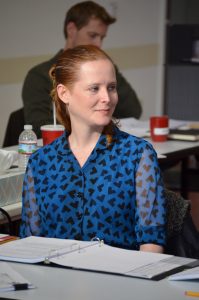 Anna O’Donoghue in rehearsal for The Rep’s “Alabama Story.”

A parallel story of two childhood friends who reunite in Montgomery in 1959 serves as the spiritual heart of Alabama Story. Lily (played by Helen Hayes Award nominee Anna O’Donoghue) is white, Joshua (played by Corey Allen, of Utah Shakespeare Festival, Pioneer Theatre Company and elsewhere) is black. Revisiting the joy and pain of their shared past, Lily and Joshua embody the private tensions that are swirling in the public arena across town. Carl Howell (Peter and the Starcatcher national tour, The Rep’s Hamlet) plays Thomas, Emily’s assistant at the Alabama Public Library Service. 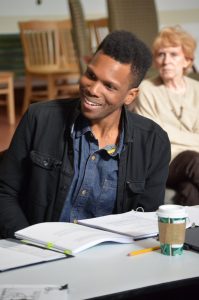 Corey Allen in rehearsal for The Rep’s “Alabama Story.”

This production is the tenth play Paul Mason Barnes  has directed for The Rep, following 2017’s Hamlet. The play is part of the final Rep season under longtime artistic director Steven Woolf, who will retire in 2019. Mark Bernstein is the Rep’s managing director.

Alabama Story premiered in 2015 at Pioneer Theatre Company in Salt Lake City and was nominated for the 2016 Steinberg/American Theatre Critics Association New Play Award. By spring 2018, it will have been seen in 22 markets around the country since its premiere. 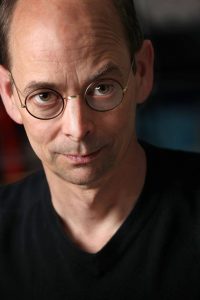 Larry Paulsen will play children’s book illustrator Garth Williams and others in The Rep’s “Alabama Story.”

It recently played the Clarence Brown Theatre in Knoxville and Washington Stage Guild in Washington, DC, where the Washington Post called it a play of “national relevance,” adding “the play feels timely, resonating with this era’s racial tensions, the ‘she persisted’ meme and continuing controversy over the Old South’s legacy. The topicality of Alabama Story infuses a theatrical moment that feels spontaneous yet intriguingly layered.”

Librarian Emily Reed is today viewed as a hero in the freedom to read movement in the United States. The playwright calls Alabama Story “a censorship drama through the lens of Civil Rights.” The play’s saber-rattling Senator E.W. Higgins is based on real-life state Sen. E.O. Eddins, of Demopolis, AL. In addition to “The Rabbits’ Wedding,” the senator sought to remove “Stride Toward Freedom: The Montgomery Story” by Dr. Martin Luther King, Jr., from Alabama library shelves. 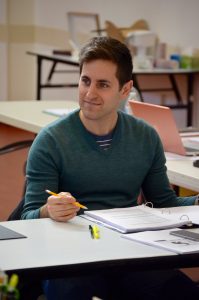 “Alabama Story wants to have the feel of a pop-up book, on the subject of how we treat each other and how character is revealed in times of conflict,” the playwright said.

Learn more about the history and goals of Alabama Story.

Playwright Kenneth Jones will be in St. Louis Jan. 1-9, 2019, for audience engagement events related to the production.

Get tickets to Alabama Story here.