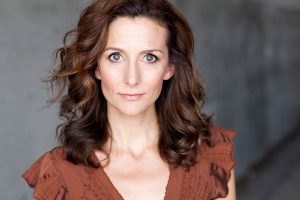 Mount Airy Lodge, the Pennsylvania mountain resort where several generations of honeymooners launched their lives together — in heart-shaped tubs, no less — shuttered in 2001, but actress-playwright Jenny Mercein has resurrected the soul of the place in a solo show, Beautiful Mount Airy Lodge, playing July 28 at Nantucket Island’s White Heron Theatre Company in Massachusetts.

The 7:30 PM performance, in association with The Nantucket Comedy Festival, represents an expansion of the show, previously seen in Seattle and Manhattan. It’s now helmed by Mercein’s husband-director Ryder Thornton, and she hopes the piece will have an extended honeymoon in regional theatres.

Beautiful Mount Airy Lodge interweaves the true story of America’s favorite honeymoon hideaway with comic anecdotes from Mercein’s life. The Mount Pocono, PA, resort was known to Northeasterners for its TV and radio commercials, which had an infectious jingle tagline that is also the title of Mercein’s show. (A new and unrelated resort called Mount Airy Casino now occupies the 36-acre site in the Poconos; the original complex was razed in 2005.)

“If you had a T.V. and grew up in the Tri-State Area in the ’70s or ’80s, chances are you have some connection to the Mount Airy Lodge commercials,” Mercein, who was raised in Scarsdale, NY, told me. “They were truly iconic in our childhood. The play is a coming-of-age story, both for me and for the Lodge. It’s got a ton of humor, but also heart and some surprisingly dark moments. The evolution of Mount Airy Lodge is an inspiring — and, in some ways, heart-breaking — version of the classic American Dream story. My own romantic coming of age is, thankfully, not quite as dramatic, but full of humorous misadventures.” 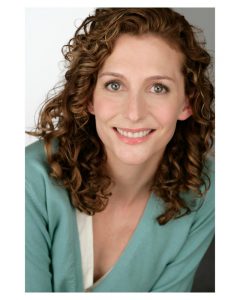 White Heron Theatre welcomes Mercein back following her turn as Annette in the 2013 production of God of Carnage. (She has vacationed on Nantucket Island since her childhood.) Mercein has also distinguished herself at resident theatres around the country, including Alabama Shakespeare Festival, Repertory Theatre of St. Louis, Keen Company, HERE, New Georges, Pioneer Theatre Company, Shakespeare Festival of St. Louis, Pennsylvania Shakespeare Festival, Florida Studio Theater, The Fulton Opera House and elsewhere. As a writer, she’s currently at work on X’s and O’s (A Gridiron Love Story), a docudrama co-created with KJ Sanchez. It will receive its world premiere under Tony Taccone’s direction at Berkeley Rep  in January 2015.

For more information about the Nantucket performance, visit WhiteHeronTheatre.org.

Mercein fielded a few questions about the project. Find her website at JennyMercein.com. 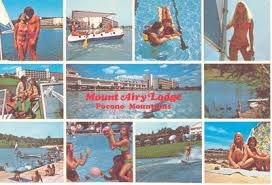 A postcard from the past.

Jenny Mercein: The show was originally part of a triptych of one-person shows by me, Glenn Seven Allen and Kelly J. Conway directed by the late, great Jerry Manning, performed under the title Past/Perfect. Glenn, Kelly, and I created our individual solo shows as a requirement of our graduate program at University of Washington’s PATP [Professional Actor Training Program].  Jerry was brand new to Seattle at the time. He came to see the performance of our shows and asked the three of us if we wanted to work with him to revise the pieces and present them as an evening. Needless to say, we all jumped at the chance!

Working with Jerry was a highlight of my time at UW. Knowing that he helped develop Rent, among countless other shows, gave me a sense of possibility as an artist. He was a genius dramaturg. We were so blessed. Past/Perfect had a short run at Seattle’s On the Boards, then we brought it to NYC for a one-night performance at the Laurie Beechman Theatre.

Are you expanding it?

Jenny Mercein: I’ve always thought there was more to be mined in the show. Originally, I mentioned a few other characters and did one or two short moments of impersonation, but I’ve longed to create a show more in the vein of Sarah Jones or Danny Hoch. Wendy Weiner’s show Gimme Shelter is also a huge influence, as well as Jessica Dickey‘s The Amish Project. Just the other night, my director/husband and I saw Jonathan Tolins’ Buyer & Cellar, which we loved! That’s a great model for what we’re trying to do with this new incarnation of Beautiful Mount Airy Lodge: some direct-address to the audience, some monologues where I transform into different characters. 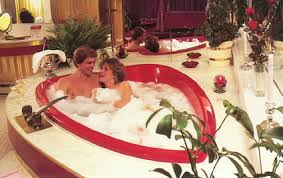 Sounds kind of perfect for an intimate second-stage space in regional theatres.

Jenny Mercein: The play has very few tech requirements. We are playing around with adding some projections, but even those aren’t mandatory, so it’s kind of a producer’s dream. I see the show as universal, but it would be a special kick to do it in Pennsylvania theatres, where Mount Airy has a deeper and more mythic resonance.

It sounds like your actor training at the University of Washington was diverse, and clearly vital to the creation of this piece.

Jenny Mercein: As I mentioned, we were all assigned the task of writing a one-person show as part of our training at UW. Actually, we had to do two! One in our second year — when I initially developed Beautiful Mount Airy Lodge — and another in our third year. Steve Pearson, the head of our program at the time, believed in empowering students to become self-generative artists. Thankfully, Valerie Curtis-Newton continues this tradition at UW today. The pieces are always wildly diverse in content, form and tone. Steve gave very few guidelines —you could pretty much do whatever you wanted. But across the board the exercise succeeds in instilling the belief that you didn’t have to wait for someone else to cast you. You can create your own vehicle. Such a gift!

I knew folks who had gone to UW’s PATP prior to my applying, and one of the reasons I chose the program was that I had been wanting to start writing my own solo material. I’m someone who needs deadlines or I will procrastinate forever! However, once I had the chance, I was stuck for an idea for a show. This was 2001, just a few months after 9/11. My best friend in New York, Caroline Hand Romita, sent me an email with a link to a New York Times article entitled, “The Thrills are Over at Mount Airy Lodge,” because she knew I was a huge fan of the commercials as a child. I read the article and I was so moved by this immigrant story. I thought, “Someone should make a movie about this!” Then I thought, “Wait a minute, I have to write a one-person show…hmm…” I went into a rehearsal room alone with the article and a tape recorder and just started riffing.

Do you have a personal connection to the hotel?

Jenny Mercein: My Barbie and Ken used to go there for romantic getaway weekends! 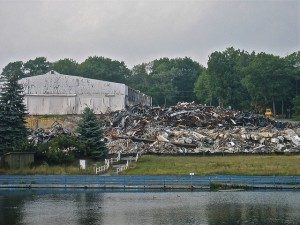 What does Mount Airy Lodge represent to you? What fascinates you?

Jenny Mercein:  As a child — and even as a teen and a young adult — Mount Airy represented romance and glamour to me. After learning the true story of the Lodge, it also came to represent the American Dream, the perseverance of immigrants in this country, and the tragedy of getting stuck in an outdated image of perfection — the cost of being unwilling to adapt to changing times.

In the show, how do you weave your personal experience with this destination spot?

Jenny Mercein: Well, when dealing with a place famous for heart-shaped bathtubs, it’s hard not to delve into romantic escapades, or mishaps, as was often the case in my dating life. Also, I found surprising personal connections between the key figures at Mount Airy Lodge — founder Suzanne Martens and her nephew Emil Wagner — and details from my own childhood. The decline of Mount Airy Lodge somewhat parallels my own disillusionment with fairy tale ideas of romantic love. Fortunately, my own romantic life seems to be having a much happier ending than that of beautiful Mount Airy Lodge! The story of Emil Wagner’s immigration to the U.S. and the nearly 50 years he spent “married to Mount Airy” struck a deep and unexpected chord with me. I found I had a lot to say.

What does your director bring to the project?

Jenny Mercein: Ryder is brand new to the project and he is a godsend! Ryder Thornton is an amazing director and dramaturg! And I’m not just saying that because we are married. He’s helped in so many ways. Ryder grew up in Los Angeles, so he had no connection to the Lodge or the commercials. That fresh perspective is invaluable. He’s given me great suggestions as to where I could move away from simple storytelling into theatricalizing moments. He’s also been amazing at helping me find a stronger arc to the piece — especially to my own story within the story. Jerry Manning was incredible at helping me create a very tight 25-minute piece. Ryder has helped me fill it out to create a fuller theatrical experience. He’s pushing me very hard — he has high standards and won’t let me just rely on being sort of charming and winging it — but I, and the piece, are so much better for it. With Ryder’s help, I’ve added about 30 to 40  minutes of new material. I even get to sing! There’s a bigger journey, for me and, I hope, for the audience, too. 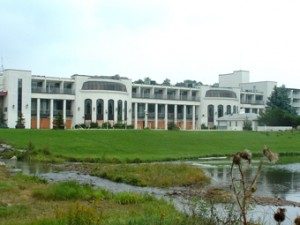 The abandoned lodge in the early 2000s.

Mount Airy Lodge is now gone. They tried to revive it but it fell apart…?

Jenny Mercein: Yeah, they tore it down and built a casino. They tried to keep it going for a while after Emil Wagner died, but the place was in bad shape — physically and financially. And Emil really was the heart and soul of the institution. Once he was gone, it didn’t really stand a chance. In 2005, just before the wrecking ball arrived, they held an auction. I almost went, but at the last minute I thought it would be too depressing.

Have you ever bathed in a heart-shaped tub?