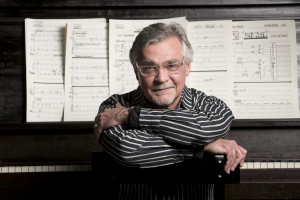 A fire that consumed three immigrant hatmakers in a notorious Ontario town more than a century ago has ignited the imagination of Canadian composer-lyricist Marek Norman, who turned their stories into a haunting new musical theater piece. Ballycroy, with book, music, lyrics and orchestrations by Norman, will get a one-time-only concert presentation Nov. 5 in Stratford, Ontario. Marti Maraden directs.

Ballycroy is now considered a ghost town in Ontario. Is the musical play inhabited and told by ghosts?

Norman told me, “Though I have not dismissed any paranormal aspects of the story, I’ve chosen to focus, for the most part, on the three milliners during their mortal existence. The fact that these women made their way to the young country of Canada in search of a better life, only to have their lives cut short by way of tragic circumstances, moved me in a profound way. I wanted to create a piece that would honor their memory.”

He added, “Over the many decades since the fire of April 29, 1875 — in which the three women perished — there have been many instances wherein visitors have written of strange sightings … apparitions, the scent of woodsmoke, the sudden feeling of intense heat … and other sensational, sometimes lurid, tales.  I’ve endeavored to capture the tone of those testimonials by way of unabashedly evocative orchestration.” 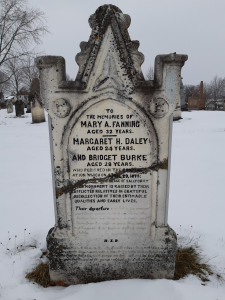 The epilogue, “Where Once Was Ballycroy,” is sung “by what might appear to be the spirits of Mary Fanning, Bridget Burke and Margaret Daley — the women who succumbed to the flames on that fateful spring night almost a hundred and fifty years ago.”

Norman, former composer-in-residence with INNERChamber, which presents the concert in his hometown of Stratford, calls Ballycroy “a play with music,” adding, “There’s a great deal of text; 12 songs, mostly narrative in nature; and a substantial amount of cinematically styled underscore.” The concert is a modified version of the intended stage script. Norman told me, “The material is still in its infancy, and will likely develop substantially before receiving its theatrical premiere.”

If Norman’s past work is any example, Ballycroy is expected to be character-rich and ravishing, with music illustrating the colors of an emotionally complicated world. As a composer for musical theater, Norman wrote the musicals Wanderlust (employing the verse of Robert Service, and written in collaboration with playwright Morris Panych and seen at the Stratford Festival) and three musicals created with lyricist-librettist Richard Ouzounian (Larry’s Party, Dracula: A Chamber Musical and Emily), among other works. (Write directly to the composer at his Facebook page, Marek Norman Music, to inquire about performance rights to his shows.) 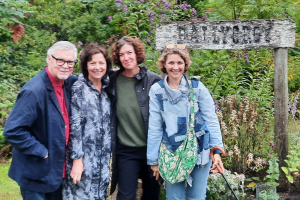 L-R, Marek Norman and the cast of the concert presentation on a field trip to Ballycroy: Barbara Barsky, Laura Condlln and Regan Thiel.

In between rehearsals, Marek Norman took time out to answer a slew of my questions about his still-forming new musical. 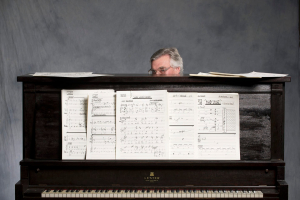 Marek Norman, letting his sheet music be the star.

At first mention of the name “Ballycroy,” I assumed you were dipping into the history of a town in Ireland, but your musical is set in Southern Ontario. Can you give a sense of the setting and people of your piece?

Marek Norman: The Southern Ontario town of Ballycroy was, in the 19th century, the fastest growing community outside of Toronto. The town’s namesake was a somewhat rugged, remote stretch of land in West-Central Ireland. Founded by Irish settlers in 1821, the town developed quickly. Its growth was entirely due to the success of a sawmill on the Humber River. Within a surprisingly short amount of time, the predominantly Irish residents (75 percent Catholic, 25 percent Protestant) had built a thriving center of business, one which enjoyed swift notoriety.

Ballycroy, though considered a rough-and-tumble town, offered countless opportunities to those with entrepreneurial designs. It wasn’t long before professional jealousies became of great concern to all — and, as strong allegiances formed, based mostly around long-standing religious differences, the town’s denizens grew wary of each other and Ballycroy’s reputation became sullied. 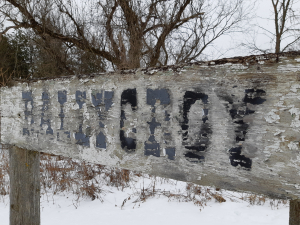 Ballycroy town sign, located directly in front of where the famed Small’s Hotel stood, until April 29, 1875.

How did you first come across this place and its people?

Marek Norman: I was completely unaware of Ballycroy until happening upon the newspaper article, “Chasing Ghosts” by Brian Lockhart (published in 2014 by The Orangeville Citizen). The piece presented a concise history of Ballycroy and explained the reason for it now being considered one of Canada’s many bona fide ghost towns.

From what I read, this is a very small town that lasted about 100 years. The population seemed to be fewer than a thousand in the 19th century. Yet, there were hotels, a racetrack, bars. Did outsiders come to Ballycroy or was it insular?

Marek Norman: During Ballycroy’s golden years, 1860-75, the town enjoyed enormous popularity with the affluent of Toronto’s high society — special events a-plenty. The racetrack, for instance, owned and operated by Peter Small, Ballycroy’s most successful businessman, drew sizeable crowds. And Small’s Hotel, where the infamous blaze began, presented the yearly “January Ball,” a mid-winter soiree that drew large crowds from near and far.

Though the play’s three central characters were residents of the Small’s Hotel, I have chosen only to reference the establishment’s many social happenings. The milliners, I propose, were not overly active, or particularly comfortable in social situations. However, I have suggested that the Ballycroy Millinery enjoyed a steady business due to the custom of the town’s wealthy visitors. 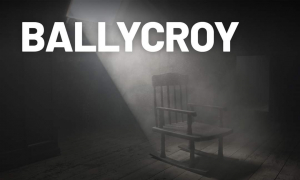 A promotional image for the INNERChamber concert presentation of “Ballycroy.”

Who are the characters we meet? What is known about their real lives, and what is myth? I read an article in the Toronto Star that seemed to question if the women who died in a fire were indeed milliners.

Marek Norman: Mary, Bridget and Margaret are, in essence, narrators — and the play, a series of recollections. Their individual histories — hopes, dreams, fears, and relationships — are, by unfortunate necessity, all manufactured, as there is little to no available information about the women.

There are a good number of secondary characters presented throughout the piece, all portrayed by a modest-sized cast of three. Also, I’ve endeavored to orchestrate in such a manner as to evoke characters within the complement of eight musicians — Piano, Flute/Alto Fl/Piccolo/Tin Whistle, Oboe/Cor Anglais, Bb Cl./Bass Clarinet, Violin, Viola, Cello and Percussion.

The concert modifications have necessitated the loss of several scenes and many characters — all of which will be reinstated if and when the play is produced in more theatrically oriented venues. Still, my preference would be that both cast and orchestra numbers remain steadfast.

Regarding questions surrounding the women: Well, there have long been rumors about the true nature of their work in Ballycroy, and whether the Millinery Shop was nothing more than a front for more nefarious aims. As with all such gossip and/or innuendo, one believes what they choose to believe. I went a different route.

Do you address tension between Catholics and Protestants in Ballycroy?

Marek Norman: Yes, indeed. It would be a most conspicuous absence were that tension to be avoided. The fractious relationship between Irish Catholics and Protestants is presented in greater detail within the full theatrical version of the play. However, less so in the modified “concert” version.

The town was known for more than one fire. Is this part of the piece?

Marek Norman: Yes, there were three high-profile fires, generally considered to have been intentionally set, between 1875 and ’78. Two of these misfortunes directly involved Peter Small and his family. The penultimate scene of my play takes place within the hotel room in which the milliners resided and presents the notion of what these women experienced during the terror on April 29, 1875.

There is tragedy in the story. But have you found lightness, joy, humor?

Marek Norman: Absolutely! The play is predominantly dark — and, at times, disquieting. However, there is considerable humor and light-hearted banter between the characters. The score, too, is often active and colorful. 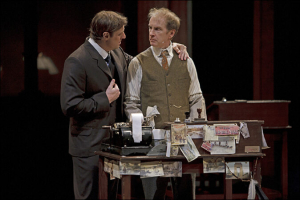 Dan Chameroy and Tom Rooney in “Wanderlust” at the Stratford Festival in Ontario.

Inspired by the verse of Robert Service, your gorgeous musical Wanderlust, seen at the Stratford Festival, captured the muscular, robust and I might say masculine spirit of the Yukon and the pioneer West. How do you capture the traditional “feminine” spirit in Ballycroy, or do you subvert it?

Marek Norman: Thanks, Ken. I appreciate your kind words regarding Wanderlust — another work for which I am extremely proud. The three women in my play, I certainly hope, are presented as unique individuals. Courageous, tenacious, proud, devout (to a point) — and yes, feminine, but not necessarily in the traditional manner. I would define their feminine traits as being more contemporary in nature. They managed to succeed in decidedly male-centric — at times, dangerous — surroundings.

What musical sound or flavor do you lead with for Ballycroy? And do your orchestrations lean into Irish musicality?

Marek Norman: There is an unmistakable Celtic tone ever-present in my score. The melodies, often lyrical, sometimes sentimental, are bathed in Kelly green — penny whistles, bodhrans, rhythm bones … though I never lose sight of the fact that the play is set, for the most part, in Canada.

What speaks most strongly to you about the piece? What’s your takeaway?

Marek Norman: We all deserve the chance to pursue our dreams, a better life, the freedom to worship as we choose, to love who we choose …. however, all too often, we find ourselves at the mercy of circumstance.

What were your primary historical sources when writing the show?

Marek Norman: The aforementioned newspaper article, “Chasing Ghosts” by Brian Lockhart, was my starting point — then followed by the small, though informative book, “Ghost Town Stories of Ontario” by Maria Da Silva and Andrew Hind, “Ontario Ghost Towns” by Jeri Danyleyko and “The Making of a Milliner” by Jenny Pfanenstiel. I visited many Southern Ontario museums/libraries and conversed with members of their history departments. Finally, providence proved kind when I connected with Dave Bond, a Ballycroy resident and de facto historian. Dave provided me with maps of the town and names of business owners at the time of the fire.

Marek Norman: The INNERchamber Music Ensemble was founded in 2009, and I was fortunate enough to be the organization’s Composer-In-Residence for a period of five years. The musicians involved are of the highest caliber — and, together, they have provided our Stratford community with the finest array of beautifully programmed chamber concerts. Ballycroy will mark my seventh premiere with the ensemble.

Marek Norman: I have known and admired Marti Maraden since our days as emerging theatre artists. Marti’s storied career as actor, director and teacher is unparalleled in Canada. Her contributions to Ballycroy have, thus far, been advisory — but “the Maraden magic” will soon dominate our staging rehearsals. I am a very lucky writer/composer! 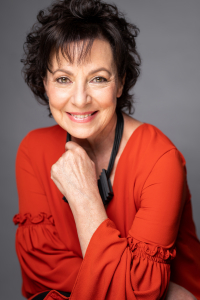 Your wife and frequent collaborator Barbara Barsky plays one of the three milliners. What is your collaboration with her like? Is she an editor, a sounding board, a muse?

Marek Norman: Barbara is all those, and very much more! We have been living together for almost five decades (married for nearly 42 years) — and, over that substantial period, have professionally collaborated as performers, directors and producers. There is no artist I trust or respect more. And, on top of all that — love, love and more love!