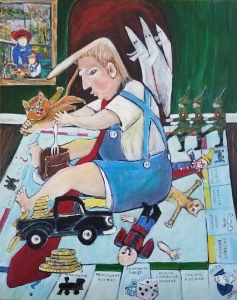 One of the extraordinary experiences that I had during the launch of my play Alabama Story at Repertory Theatre of St. Louis in early January was experiencing a juried art exhibit of works that were related to the themes that surface in the fact-inspired drama. Webster Arts sponsors the exhibit, “Freedom of Expression,” featuring 41 works by artists from as nearby as St. Louis and as far away as Turkey. They all took my breath away. Some images are below, as is a link to images of all the art.

The free gallery show continues to Feb. 28 at Webster Arts Center in Schultz Hall on Eden Seminary campus in Webster Groves, a few blocks from The Rep.

Artists working in many media “responded to themes of censorship, bigotry, free speech, racism, speaking truth to power, and the impact of current events,” mirroring themes of the play, which continues at The Rep to Jan. 27. I attended the exhibit’s opening Jan. 15, when the room was teeming with some of the contributing artists and a slew of Rep subscribers who were eager to talk about the area premiere of Alabama Story, directed by Paul Mason Barnes.

I think my favorite work in the exhibit is Rose Shankman’s powerful “me Me ME,” an acrylic on canvas piece, which shows a toddler Donald Trump sitting on a Monopoly board as he paws an angry pussy cat in a realm that is part Hellscape and part playroom. He has broken the arms off a doll that may be Putin; he sits on hand puppets of a clown and another cat; his toy soldiers are goose-stepping Nazi storm troopers; a trio of hooded KKK members look like ghosts entering from the hall; a big beautiful piece of chocolate cake with a fork in it sits on a plate between his legs; a ridiculously long red necktie spills onto the carpet; a soiled diaper is evident under his onesie. On the back wall of the room is Renoir’s 1881 impressionist painting “Two Sisters (On the Terrace),” suggesting a watchful feminism and a kinder and more beautiful world, where flowers bloom. It’s quite brilliant and layered. Shankman, of Washington state, explains it this way: “Representing destruction by anger, pettiness in this current volatile political environment.” 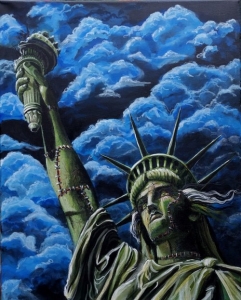 St. Louis artist Mollie Chounard’s acrylic on canvas piece “Who’s the Real Monster,” depicting a Frankenstein-scarred Statue of Liberty, appears on the exhibit poster. It’s harrowing. She wonders, “How far have we really come toward the dream of freedom and equality for all, when by deed or action our own leaders fail to meet such high standards?”

The artworks have a distinctly political edge, illuminating the political tension of the play. Alabama Story retells 1959 true story of Emily Wheelock Reed, the Alabama state librarian who refused to ban the children’s book, “The Rabbits’ Wedding,” which depicted the marriage between a black and white rabbit.

The picture book was written and illustrated by Garth Williams, known for illustrations of E.B. White’s “Stuart Little,” “Charlotte’s Web” and the “Little House” series by Laura Ingalls Wilder. Williams defended his book as an apolitical story that did not seek to promote racial integration, which was the charge of incensed Southern segregationists who called the book propaganda and wanted it pulled from libraries and burned.

Williams said his images were inspired by 11th-century Chinese scroll art of black and white horses in misty landscapes. The book was published in black and white, so he was seeking visual contrast.

Williams was inspired by centuries-old artwork, I was inspired by Williams’ artwork and the subsequent controversy, and now my play has inspired artists to create more artwork. I love being part of that continuum. 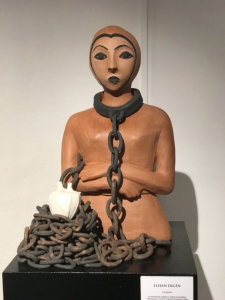 The play and exhibit are presented concurrently. The theatre and gallery are a few blocks apart. The Webster Arts Center is located in Schultz Hall on Eden Seminary campus, at the corner of Bompart and Lockwood avenues in Webster Groves. Enter the campus off Lockwood at the main Eden entrance. Webster Arts Gallery hours are 9 AM to 4:30 PM, Monday through Friday.

Check out all the images of the exhibit here.

Learn more about Alabama Story’s run at The Rep.