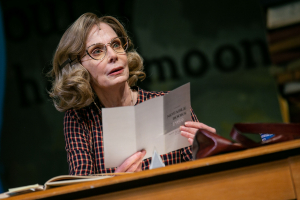 Georgia Ensemble Theatre in Roswell, GA, is giving Alabama Story — the six-actor, one-set drama about an embattled librarian in the Deep South — its state premiere Sept. 8-25, 2022, a time when librarians across the country are being persecuted for giving the public access to a wide variety of materials. Playwright Kenneth Jones’ fact-inspired drama is directed by Thomas W. Jones II.

The acclaimed play has been seen in more than 40 productions around the country and is now published and licensed through Dramatists Play Service, from which you can get an e-copy of the script or ask about performance rights. (Hard copies of the script will be available at a later date.) 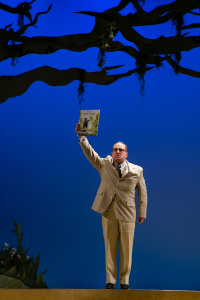 Georgia Ensemble Theatre bills Alabama Story this way: “Political foes, star-crossed childhood friends, and one feisty state librarian take the stage for a uniquely poetic love letter to reading. We all have more in common than we imagine. A drama based on true events.”

Don Farrell, who appeared as Senator Higgins in the Indiana premiere of the play in 2019, reprises the role in his hometown of Roswell. Emily Reed, the heroic librarian that he persecutes, is played by Shannon Eubanks.

Alabama Story focuses on how Alabama state librarian Emily Wheelock Reed protected a children’s book that was under attack by state politicians in 1959 Montgomery, AL. The book, “The Rabbits’ Wedding” by Garth Williams, featured a black rabbit and a white rabbit who decide to marry. The play toggles between the political conflict and a reunion of two childhood friends that same year, with themes interlacing by play’s end.

The Georgia run coincides with the annual Banned Books Week (Sept. 18-24), which brings attention to censorship threats against materials in public and school libraries.

“Everything old is new again,” said playwright Jones. “In the 1950s, censors decried the dissemination of books about Civil Rights and racial integration. Today, LGBTQ books and books with perceived injurious sexual or irreligious content are on the burner. Librarians remain at risk.” 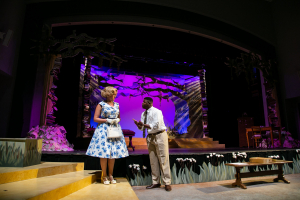 Emily Nedvidek and Jontavious Johnson as Lily and Joshua, childhood friends meeting in adulthood in 1959. (Photo by Casey Gardner Ford)