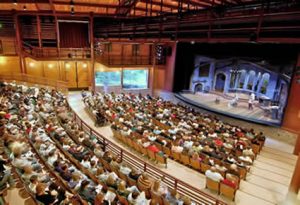 Peninsula artistic director Greg Vinkler called the Southern-set play an “engrossing new work.” He added, “The book and film ‘To Kill a Mockingbird’ came to my mind as I was reading it. It is funny. It is touching. It is a play about tests of character — almost a political thriller — and very theatrical. Alabama Story received rave reviews when it had its world premiere earlier this year at Pioneer Theatre Company in Salt Lake City, and we are elated to bring this moving new work to our audiences.”

Performances will play Aug. 17-Sept. 4, 2016, at the Equity company’s 600-seat home. The Peninsula news comes on the heels of a Florida booking of Alabama Story; it will make its Southern premiere at Florida Studio Theatre in April 2016. FST artistic director Richard Hopkins previously called Alabama Story “probably the best Southern play I’ve read in 10 or 20 years.”

In its Utah world premiere, the title became the top-grossing new play in the history of Pioneer Theatre Company. Read more about the production history of Alabama Story here.

Here’s how Peninsula Players bills Alabama Story: “Inspired by true events, it centers on Emily Wheelock Reed, a fearless librarian who opposes a campaign to purge a controversial book from the state library. ‘The Rabbits’ Wedding’ is a picture book aimed toward children aged 3 to 7, illustrated by Garth Williams — best known for his illustrations of ‘Little House on the Prairie’ and ‘Charlotte’s Web.’ It tells the sweet story of two little rabbits who lived happily ever after in the friendly forest. However, one rabbit is white and the other black and we are in 1959 Montgomery, Alabama. The play pits Senator E.W. Higgins, a bullying segregationist, against the redoubtable Emily Reed — incredible opposites and incredible forces — and puts both of their worlds at risk. While they spar, a parallel story of childhood friends, Joshua and Lily, a black man and a white woman reunited in adulthood, reflects the personal and political tensions swirling in Montgomery.”

The play was a 2014 finalist for the Eugene O’Neill Theater Center’s National Playwrights Conference.

Kenneth Jones is a playwright, librettist and lyricist. His play Alabama Story, a 2014 Finalist in the O’Neill National Playwrights Conference, had its world premiere by Pioneer Theatre Company in January 2015 under the direction of Karen Azenberg following development in PTC’s 2014 Play-By-Play series, Alabama Shakespeare Festival’s Southern Writers’ Project and TACT/The Actors Company Theatre’s NewTACTics series Off-Broadway. It will make its Florida premiere in April 2016 at Sarasota’s Florida Studio Theatre followed by its Midwest premiere at Peninsula Players Theatre in Wisconsin in August. With Karen Azenberg, he co-conceived PTC’s 2015 holiday musical It Happened One Christmas. His new play Two Henrys will have development by a resident Equity theatre in 2016. His darkly comic Christmas musical Naughty/Nice (with composer Gerald Stockstill) was recently published by stagerights.com. His musical Voice of the City enjoyed readings by York Theatre Company and Human Race Theatre Company. He is a member of BMI, The 72nd Street Gang Playwrights Collective and the Dramatists Guild. Visit ByKennethJones.com. Follow him on Twitter @bykennethjones.