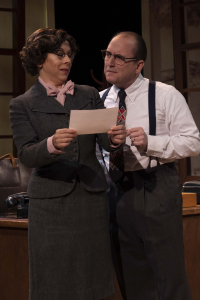 Cynthia Collins and Don Farrell in “Alabama Story” at Actors Theatre of Indiana in 2019. (Photo by Ed Stewart)

Alabama Story, the six-actor/one-set social justice drama by Kenneth Jones, will make its professional streaming debut Jan. 18-Feb. 14, 2021, when Actors Theatre of Indiana offers an on-demand presentation of the archival recording of its fall 2019 production. The staging marked the Indiana premiere of the play about real-life Indiana librarian Emily Reed, who faced persecution when she worked in the Deep South in the 1950s. The streaming event is made possible with the approval of the playwright, who is a member of The Dramatists Guild of America, director Jane Unger, who is a member of Stage Directors and Choreographers Society (SDC), plus Actors’ Equity Association and other artists involved.

The drama was originally part of ATI’s 2019-2020 season, performed at the Studio Theater at The Center for the Performing Arts in Carmel, IN. Like all resident theaters, ATI has not produced since the onset of the COVID-19 pandemic, since March 2020.

ATI co-founder and artistic director Don Farrell, who plays State Senator E.W. Higgins in the drama, said in a statement, “In the year since we presented this production, the United States has intensely dealt with issues relating to race. The themes of civil rights and prejudice are prevalent today and this story from 1959 feels even more appropriate. I spoke with my colleagues at Actors Theatre of Indiana and we knew we wanted to do something. So, the idea came to bring back our production of Alabama Story.” 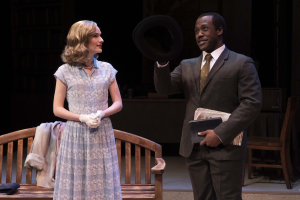 Maeghan Looney and Cameron Bass as Lily and Joshua in “Alabama Story” at Actors Theatre of Indiana in 2019. (Photo by Ed Stewart)

The production made front page news in the Indianapolis Star at the time. The Carmel, IN, company presented the state premiere of the play that has seen 40 productions around the country since its 2015 debut. The local interest was high owing to Emily Reed being a Phi Beta Kappa graduate of Indiana University and a native of Culver, IN, where she briefly worked as a librarian.

Alabama Story shows how Reed defended a children’s book, “The Rabbits’ Wedding,” about a black-furred rabbit marrying a white-furred rabbit. Alabama lawmakers saw the book as supporting racial integration in a time when segregation was the law of the land. One state legislator in particular wanted the book burned. The play mixes fact and fiction to tell a story of censorship, Civil Rights and American character in what the playwright calls “the Deep South of the imagination.” 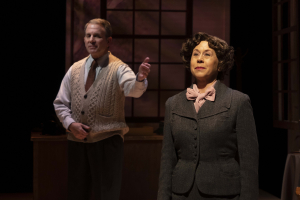 The book’s author and illustrator, Garth Williams, played by Paul Tavianini in Indiana, narrates the story and plays several characters. The late Williams is best known for his illustrations for “Little House on the Prairie,” “Stuart Little” and “Charlotte’s Web.”

Are you a producer interested in a free perusal copy of Alabama Story? Request a script here.

“It continues to be of great interest since it is based on actual events and is so relative to current headlines,” said Farrell. The streaming opportunity coincides with Martin Luther King, Jr. Day and Black History Month. Dr. King, his writing and his followers are all woven into the fabric of Alabama Story. (A book by Dr. King was among those criticized by Alabama lawmakers in 1959.) 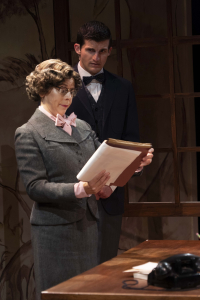 Cynthia Collins and Samuel Wick as embattled librarians in “Alabama Story” at Actors Theatre of Indiana. (Photo by Ed Stewart)

ATI co-founder and associate artistic director Cynthia Collins, who plays state librarian Emily Reed, said in a statement, “This play is important because it focuses on many topics. Of course, there is the topic of segregation. But it focuses on individuals. It’s a human story.”

Click here to purchase $35 ticket access to the streaming version of Alabama Story, presented by Actors Theatre of Indiana.

Learn more about the history of Alabama Story, seen in productions by resident Equity theaters and well as community, civic, college and high school theaters.