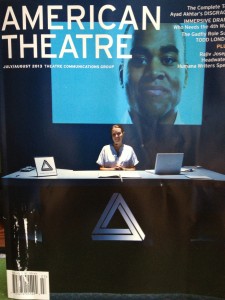 The July/August 2013 issue of American Theatre magazine, just out this week, has a great piece about Alabama Shakespeare Festival‘s 2013 Southern Writers’ Project Festival of New Plays, at which my play, Alabama Story, had its first public presentation. American Theatre staffer Diep Tran was kind enough to mention the standing ovation following the May 12 reading of my script. She came down to Montgomery for the festival weekend May 10-12 and interviewed SWP coordinator Nancy Rominger and ASF producing artistic director and the three other talented playwrights (James Bowen, Elyzabeth Wilder, Michael Vigilant), in this valuable, underexposed program devoted to dramatists and the development — not the end result — of new works.  Here’s a PDF of the piece.

Read my earlier blog post about SWP. (Alabama Story will get a private reading in Manhattan this summer, so director Karen Azenberg and I can hear some of the changes since SWP.)