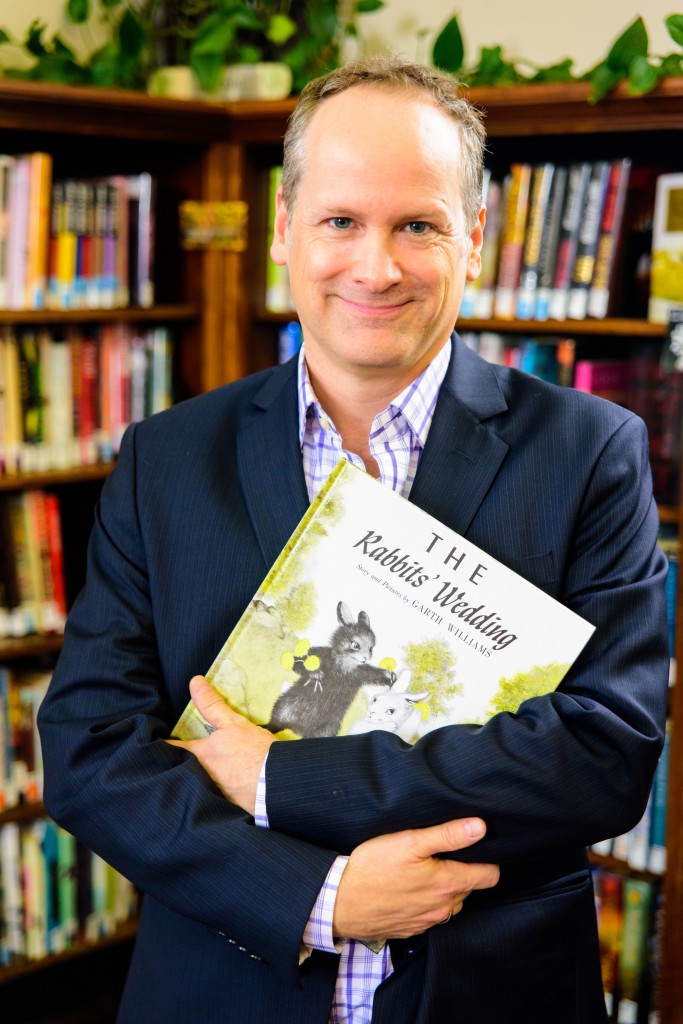 Kenneth Jones with a copy of a controversial children’s book that inspired “Alabama Story.” (Photo by Alex Weisman)

Alabama Story, the acclaimed historical drama by Michigan-bred playwright Kenneth Jones, will make its Wolverine State premiere in fall 2016 in a staging by The Theatre Company of the University of Detroit Mercy, the lauded troupe that for 45 years has mixed students and working professionals in award-winning hybrid-cast productions. The author will be in residence for part of the run of the play, which is set in “the Deep South of the imagination” where bigger-than-life characters battle over censorship and civil rights questions.

This marks the fourth regional production (and the first to break into the university market) since the play’s 2015 premiere.

The “local angle” of the Motown premiere is not limited to the author’s roots in the metro Detroit area, where he was raised in Southfield and Beverly Hills and later lived as a free-lance writer in Grosse Pointe. There is additional resident history embedded in the fact-inspired drama: the play’s moral center, real-life Alabama State Librarian Emily Wheelock Reed, worked for the Detroit Public Library in the 1940s; and a fictional African American civil rights worker in the play, Joshua Moore, lives in Detroit, where he works for Vernors Ginger Ale and makes pilgrimages to his home state of Alabama. The play is set in Montgomery, AL, in 1959, as the civil rights movement is in full blossom. 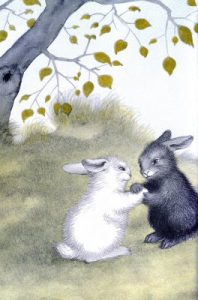 A page from “The Rabbits’ Wedding,” a 1958 children’s book that caused a sensation in the Deep South.

In the two-act Alabama Story, a gentle children’s book with an apparent hidden message stirs the passions of a segregationist State Senator and a no-nonsense State Librarian. Despite pressure, the librarian refuses to remove the picture book “The Rabbits’ Wedding” — the story of a white rabbit marrying a black rabbit — from her library shelves. Meanwhile, a reflective tale of childhood friends — an African-American man and a woman of white privilege, reunited in adulthood in Montgomery that same year — provides private counterpoint to the public events of the play.

The play is narrated by Garth Williams, the illustrator of the controversial book, who serves as a sort of omnipresent onlooker in a world of outrageous and injurious politicians. Williams (1912-1996) is best known for his artwork for “Charlotte’s Web,” “Stuart Little” and “Little House on the Prairie.” (“The Rabbits’ Wedding” is still in print.)

Jones is in discussions with The Theatre Company about making script changes specific to the Detroit staging. A director for The Theatre Company production will be announced. UD-Mercy theatre department chair Melinda Pacha is expected to be the scenic designer. (For the record, Jones is a graduate of Oakland University in Rochester, MI, where he studied communications/journalism with an emphasis on film and theatre history, and where his mentor was Yolanda Fleischer, who would later be a professor and director, now retired, with UD-Mercy’s theatre department and The Theatre Company.)

Alabama Story will open The Theatre Company’s 46th season. The company announced the fall booking in programs for its current production, Robin Bradford’s Low Hanging Fruit, a Midwest premiere about homeless women veterans, which plays March 3-20, in a co-production with Matrix Theatre Company.

Alabama Story performances will begin around Sept. 22, 2016, at the 130-seat Marlene Boll Theatre at the Boll Family YMCA, 1401 Broadway, in downtown Detroit.

Before he was a playwright, Jones was a theatre reporter and critic for newspapers in metro Detroit 1985-1998, first at The Oakland Press in Pontiac, MI, and later contributing articles and reviews to The Detroit News for a decade starting in 1989 before becoming chief theatre critic there for four seasons. He moved to New York City in 1998.

“I came of age as a theatregoer seeing adventurous productions produced by The Theatre Company in the 1980s and 1990s,” Jones said. “It’s where I first encountered the work of Jane Martin, Shelagh Delaney, Romulus Linney, Bertolt Brecht, Edward Albee, Joe Orton and so many others. I am honored to be invited into this tradition of unique storytelling, where theatrical invention, social justice themes and ambitious bigger-than-life characters are embraced, and where an ‘independent’ aesthetic is celebrated.” 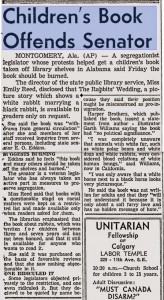 In New York City, Jones concentrated on writing plays and musicals while serving as a writer and editor at Playbill.com for 15 years before focusing solely on creative writing. In 2015, Alabama Story had its world premiere by Pioneer Theatre Company in Salt Lake City in a well-reviewed staging that became the company’s highest grossing new play ever. It was a finalist in the National Playwrights Conference of the Eugene O’Neill Theater Center in 2014 and is a current nominee for the Steinberg/American Theatre Critics Association New Play Award.

Read the American Theatre magazine feature about Alabama Story. Listen the the Salt Lake City NPR report about the play.

In 2016, Alabama Story will be seen in at least three Equity regional productions around the country, including at Florida Studio Theatre, Wellfleet Harbor Actors Theatre in Massachusetts and Peninsula Players in Wisconsin.

His latest play, Two Henrys, a drama about Midwestern temperaments set in the age of marriage equality, had a February reading in Pioneer Theatre Company’s Play-By-Play series in Utah and is a current semi-finalist in the 2016 National Playwrights Conference of the O’Neill Center.

Ask for a perusal copy of Alabama Story.