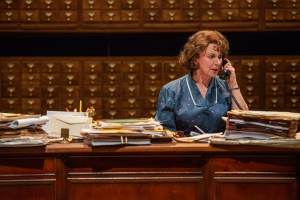 Alabama Story, the six-actor drama cited by The Washington Post for its “national relevance” — trafficking in racial tensions, bullying politicians, persecuted but persistent women, Civil Rights issues, and the continuing controversy over the Old South’s legacy — is seeing a surge of interest in the 2020 presidential election year, even as three planned productions were sidelined by the COVID 19 pandemic.

This fall, Kenneth Jones’ acclaimed, highly theatrical, fact-inspired, one-set play will get at least two socially distanced outdoor staged readings (one in Michigan, another in upstate New York); one fully mounted production to be streamed pay-per-view online for viewing at home (produced by Oak Ridge Playhouse in Tennessee); and one webinar-style Zoom reading for a limited audience (presented by Pacific Conservatory Theatre/PCPA in California). 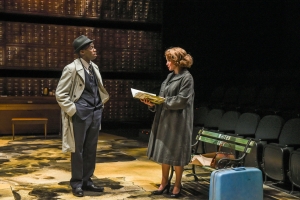 By December 2020, Alabama Story will have been seen in more than 35 markets around the country since its 2015 premiere produced by Pioneer Theatre Company and directed by Karen Azenberg in Utah. High schools and colleges are also asking for perusal copies of the script at a higher rate than before. Request a free perusal copy here.

When the pandemic shuttered most theaters in the U.S. the weekend of March 15, Alabama Story was among the victims. Alabama Shakespeare Festival was wrapping the second week of a three-week run, directed by artistic director Rick Dildine. The production — its premiere in the town where the play is set — shut down and visiting actors high-tailed it home before the pandemic worsened. Montgomery Mayor Steven L. Reed, the city’s first Black mayor in the Cradle of Civil Rights, was in attendance for the run.

Planned spring productions were either cancelled (at Great Plains Theatre in Kansas) or postponed to a later date (at the Abraham Lincoln Presidential Library and Museum in Illinois, which hopes to stage the play in fall 2021).

Cumberland County Playhouse in central Tennessee is moving forward with its planned full production of Alabama Story Oct. 9-Nov. 12. “In order to safely social distance, there are only 80 tickets available for each performance,” according to the central Tennessee troupe’s website.

Cynthia Collins and Don Farrell in the 2019 Actors Theatre of Indiana staging of “Alabama Story,” the archival recording of which will be streamed this fall. (Photo by Ed Stewart)

Also this fall, Actors Theatre of Indiana will stream the archival video of its 2019 Indiana premiere production, which made front page headlines in the Indianapolis Star last year because the real-life heroine at the center of the play — Emily Wheelock Reed, persecuted for protecting a children’s book in the Jim Crow South in 1959 — was raised and educated in Indiana.

A virtual stream of the ATI production will be available Sept. 27-Oct. 10, coinciding with Banned Books Week. Online discussion appearances surrounding the stream will feature the playwright, director Jane Unger and others. The Indy-area play was filmed by Zach Rosing and will be enhanced by local filmmaker Philip Paluso.

In November, Kenneth Jones will be the virtual keynote speaker in a fundraiser for Oakland Literacy Council on his home turf of Oakland County, Michigan, where Alabama Story will be discussed in a webinar format. In anticipation of that appearance, Oakland Literacy Council is sponsoring a remount of director John Rutherford’s sold-out July 2020 outdoor staged reading of the play — seen on the campus of Jones’ alma mater Groves High School in Beverly Hills, MI. The resurrected reading will play 2 PM Oct. 3 in a garden on the spiritual campus of historic Kirk in the Hills in Bloomfield Hills, MI. Attendance is limited to 100 in a socially distanced setting. 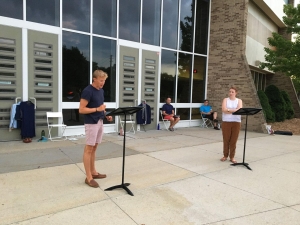 Actors in rehearsal for a socially distanced outdoor summer reading of “Alabama Story,” which will be reprised in October in Bloomfield Hills, MI.

Another outdoor socially distanced staged reading will be presented by Theater Project of Schoharie County in Veterans Park in Cobleskill, NY, in late September, around the time of Banned Books Week.

On the West Coast, the respected Pacific Conservatory Theatre/PCPA in Santa Maria, CA, is planning an October Zoom reading presentation, mixing Equity actors and conservatory students as part of its InterPlay new play reading series. That series, usually presented live and in person, is going virtual this year.

Perhaps the most ambitious staging in this period is being produced by Oak Ridge Playhouse,  the popular 77-year-old civic theater in eastern Tennessee. Executive artistic director Reggie Law designs and directs the social-justice play — and coordinates the filming of it with resident filmmakers and videographers — in September for a streaming event coinciding with Banned Books Week. 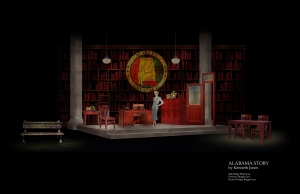 Oak Ridge Playhouse was forced to suspend operations with the outbreak of COVID-19. “Virtual productions are now the reality in theatre, at least for the foreseeable future,” Law said in a statement. “With that in mind, we have the goal of providing our patrons with as similar an experience as they could get if they were watching live from their seats at the Playhouse. The Playhouse staff and volunteers have tasked themselves with mounting a fully realized stage production while maintaining safety precautions related to COVID-19. Even though audiences will be at home, they’re going to get a full-blown show — scenery, costumes, lighting, the works.”

Law compares the presentation “to the type of thing where you see a play on ‘Great Performances’ on PBS. It’s not like a film. It’s clearly a show on stage. But streamed into homes.” 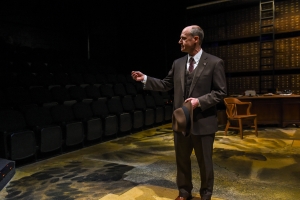 The process doesn’t come without challenges. “From initial rehearsals being held via Zoom meetings, to in-person rehearsals and costume fittings in masks, there are the added demands of designing the lighting to suit both stage and camera, sanitizing of props and scenic elements, and, of course, finding the right play for this type of format.”

Here’s how Oak Ridge Playhouse bills the play: “In Alabama Story, the passions of a segregationist State Senator and a no-nonsense State Librarian in 1959 Montgomery are enflamed when a gentle children’s picture book about the  marriage of two bunny rabbits finds its way into the public consciousness, just as the Civil Rights movement is flowering. Simultaneously, another story of childhood friends — an African American man and a white woman, reunited in adulthood that same year — provides private counterpoint to the public events swirling in the state capital. Political foes, star-crossed lovers, and one feisty children’s storyteller inhabit an unforgettable Deep South of the imagination brimming with humor, heart, and humanity.”

“The play not only lends itself to video and a minimalist approach to production,” Law said. “It’s also a beautiful, thoughtful, and touching work that examines and sheds light on matters of censorship and race relations.”

According to Oak Ridge Playhouse, “While a period set piece, the show offers a contemporary appeal in light of current social movements and the coincidence of the production’s air dates with national Banned Books Week, an annual event that celebrates the freedom to read and highlights the value of free and open access to information.” 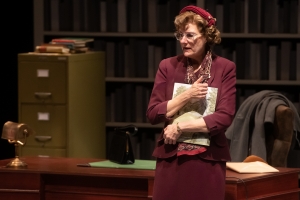 Jeanne Paulsen as Emily Reed in “Alabama Story” at The Repertory Theatre of St. Louis (Photo by John Gitchoff)

Oak Ridge Playhouse’s Alabama Story will be available for streaming on selected dates Sept. 25-Oct. 4. Tickets can be purchased via the Playhouse website beginning Sept. 7.

Learn more about the history of Alabama Story here.

Please consider a tax-deductible donation to the Emergency Grant Program of the not-for-profit Dramatists Guild Foundation, which helps writers, composers and lyricists who are in need. The need is heightened during the 2020-21 shutdown of live theaters due to the COVID 19 pandemic.