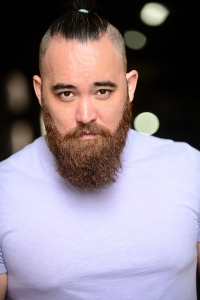 Tran told me that the 70-minute play is “a mythology built on the fictional battle between the Mongols and a kingdom of Europeans — he never quite crossed paths with them. So the audience is cast as a group of folks who were sent to barter for peace. The character they meet is trying to determine whether or not that is an achievable goal.”

Here’s how Know Theatre bills the piece: “In the 12th and 13th centuries, the Mongols swept across the world, led by a charismatic and powerful leader, crushing all resistance in their path, folding the conquered peoples into their empire. Now, you the audience, with your town under siege, have the opportunity to plead your case before the Khan himself. But first you’ll need some advice from the Khan’s most trusted adviser.” Rebecca Wear directs. Learn more about Know Theatre and how to get tickets here. 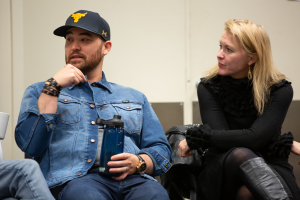 Adam Tran and Amy Bodnar on a rehearsal break from “Hollywood, Nebraska” for Actors Theatre of Indiana in 2019. (Photo by Suzanne Stark)

“This is definitely accessible history and contemporary mythology,” Tran said. “As far as Genghis Khan goes, there may be no actual fact, due to the limited information we have that was discovered post mortem, and has seen many translations over the years.”

I first got to know Indianapolis-based Tran’s work when he was cast in a developmental reading of my comedy Hollywood, Nebraska at Actors Theatre on Indiana in Carmel, IN. He was funny and tender and sad in his role as a lovestruck blue collar Midwesterner, and I’ve been recommending him to theaters ever since. He doesn’t need my help. Among other gigs, he’s given a range of performances, from playing Elvis in the musical Million Dollar Quartet (twice, at Actors Theatre of Indiana); Donald in You Can’t Take It With You (Indiana Rep); Demetrius in A Midsummer Night’s Dream (Indianapolis Shakespeare Company); and guesting on TV’s “Chicago Med.” For Know Theatre of Cincinnati, he appeared in Whisper House (2018) and Girl in the Red Corner (2019).

As a playwright, his work is on New Play Exchange.

I threw some questions at Adam Tran in the days leading up to the launch of Mongrel. 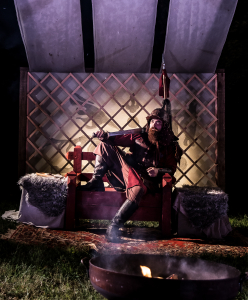 I’m always interested in the first moment of inspiration for a piece. How did Mongrel come about?

Adam Tran: A few years ago, while starting a contract at Know Theatre of Cincinnati, I got to attend a reading of a one-person show by a local actor named Maggie Lou Rader — she’d written a show about Mary Shelley (titled Mary’s Monster) and it was fascinating. I found myself suddenly very interested in this character and the way that Maggie took a historical figure and made her accessible and appealing to a modern audience. [That] got the wheels turning. Genghis Khan had always been in my unconscious periphery and suddenly the idea started to come.

What attracted you to the life and story of conqueror Genghis Khan?

Adam Tran: So he was sort of a figure I was vaguely aware of. I think he’s in our collective cultural unconscious, though nothing specific. Yet, somehow, we’re all at least semi-aware of him and what some of his characteristics were. I didn’t know much about him when I started, I just started reading and researching, and the more I did, the more fascinating he became. I think the first time I heard the name was when I was a kid…while watching the Alec Baldwin movie, “The Shadow.” The more I researched about him, the more I realized that the only thing we really “know” about him is from one document, “The Secret History of the Mongols,” which was discovered some 200 years after his death, and then conjecture via a game of telephone from his grandson Kublai from Marco Polo’s time with him. I read everything I could get my hands on that even mentioned his name, I listened to Dan Carlin’s “Hardcore History” about five times on my commute back and forth to Cincy — and then I let it all go so I could focus on the mythology I hoped to build. 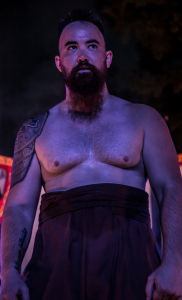 Genghis Khan’s campaigns to expand the Mongol Empire were brutal. I assume you don’t shy away from that. How do you balance violence with humanity?

Adam Tran: In some ways, I think violence might be part of humanity. It seems that no matter how far we manage to evolve, we’re perpetually encountering violence of all kinds. Genghis was different only in that he seemed to accept violence as an inevitability and utilized it in a way that few in our history have. Not to say that I think it was O.K., just that I think he had a different way of looking at the world even in his time, let alone in the way that our modern ideologies could wrap around.

Can you share a little about the title “Mongrel” for us? It’s a play on “Mongol”?

Adam Tran: “Mongrel” is used in the play. It’s a word that starts as a slur and is reclaimed throughout the narrative. I, being of mixed race heritage, have heard this applied to me, and in this play, so does our protagonist. His navigation of the meaning of the word is a big part of his journey. As it was mine. I used to find being “different” very debilitating and it made me sad, but now I try to utilize it in a way that is empowering.

Does your own racial background and cultural heritage inform the play?

Adam Tran: Absolutely it does. This is a story told from a specifically mixed race Asian-American lens. I’m mixed-race Asian American, and that has not only informed my play but my life. In the play it’s a meeting of two worlds, and I am the result of a meeting of two worlds. I applied this same line of thinking to the protagonist of my story; his navigation of being of two worlds is based on a lot of my experience. So, that’s all in the soup that is this play. The idea of being “singular” is often painted with such a complimentary and positive brush, but the loneliness of singularity is a hard row to hoe. 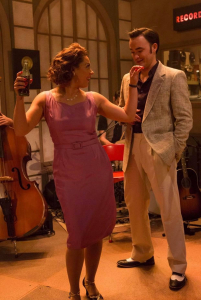 Can you unpack the word “singular” here?

Adam Tran: Singularity applies to my recipe of ethnicity, as well as my upbringing, as well as fatherlessness, as well as my being unconventionally masculine from a lack of exposure to the masculine world as a kid, as well as my views of the world, as well as my interests, as well as my unwillingness to mold myself into something more acceptable for the sake of making friends, etc., etc. So — singularity. Just being different from the world around me and feeling like a terminal misfit, but that there’s power and also loneliness in that feeling.

What has director Rebecca Wear brought to the table?

Adam Tran: Rebecca is magic! She came in and brought such a positivity and support, but also perpetually challenged me and worked with me in editing the script and sharpening the moments. She’d done and continued to do a ton of research throughout, and that continued to hone her ideas of what the play could be as well. She also brought a female perspective on a distinctly male and masculine play. I could not have done this without her and I’m forever grateful that she was so generous and supportive and brilliant.

How has Know Theatre of Cincinnati developed the play in recent seasons? How has the play changed?

Adam Tran: Well we’d hoped to have more readings last year leading up to the play, but…well, the world was on fire, so we had a virtual reading I hosted from my apartment last year — sorry, neighbors! — and we’ve had a living document that I, and Rebecca, and Andrew Hungerford, artistic director of the Know, have been looking at, and they’d send notes or suggestions, and we just kept working and working and then the first week of rehearsal it was all about developing the script further. So my basic structure is still there, but it’s sharper, and more efficient, and the storytelling is deeper.

You’re an Indianapolis-based actor. Where did you grow up and what was your first exposure to theater? When did you first say “I want to perform!”?

Adam Tran: I think I was born a show off. But I didn’t really truly get the bug until after high school. I definitely did my share (and everyone else’s) of theatre in high school — shout out Vickie Parker who saved my ass and my diploma by recognizing my need for that in my life and providing opportunities for me that didn’t exist before so I could get enough credits to graduate. But after high school I did a dinner theatre in Hillsboro, IN — Myers Dinner Theatre, Donna and Richard Myers are angels and were so very kind to me. Then I auditioned for a school in New York City, which I’ll leave unnamed because they hadn’t quite got their footing at the time, and I showed up so fast that they didn’t have financial stuff worked out, so I never paid for my semester I went there before returning home. So, I went back home to Greencastle, IN, and got a “real” job and kinda forgot about it all for a bit. Until many precipitating events led me to go to college.

I got my theatre training under the guidance of Ronn Johnstone at Anderson University. Ronn, along with my sweet friend and mentor Amy Hayes (who probably saved my life with her insistence that I go to college), and Vickie Parker (my high school theatre teacher and guardian angel), make up the theatrical trinity that gave me the tools and the belief in myself as an actor to make a go of it.

Theaters shut down in March 2020. How has the shutdown affected you personally? What have you been up to in pandemic times?

Adam Tran: Well that sucked, didn’t it? The shutdown affected my income pretty damned decidedly. And, of course, it was tricky navigating day-to-day life sans my regular creative outlets. What did I do during COVID? I worked out like a maniac — shout out to Iron Valley Barbell for giving me a home away from home and pseudo mental health outlet. And I started writing songs. I’d intended to record an album but I’m back to the drawing board on that as I think the songs get better, and when I put something out I want it to be my best.

What have I missed about you as an actor or writer that you want to share?

Adam Tran: I think the big thing I’ve learned, and I hope I’ve highlighted throughout this interview, is that I’m not an island. I’m not a singular entity that is somehow traversing all of the madness of this business by my sheer will and the pulling up of my own boot straps. Like everything in our lives, theatre is collaboration above all. And I’m deeply grateful to all of the folks who’ve seen it worth their while to help me. And my biggest thanks to my family who’ve endured my madness and instability while pursuing a life of playing pretend and my wife, Kelsey Leigh Miller, who not only believes in and pushes me to be better, but is always there to pick me up when I fall or when I’m feeling like I’m going to.