A Dickens of a Time: Greta Lambert Stars in Her Own Solo “Carol” at Alabama Shakespeare Festival 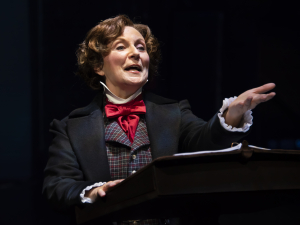 Greta Lambert in her own adaptation of “A Christmas Carol” for Alabama Shakespeare Festival. (Photo by Frank C. Williams)

Actress Greta Lambert, one of the great things to happen to American regional theater, is finally getting a chance to perform her one-person adaptation of Charles Dickens’ “A Christmas Carol” in front of a live audience. It was commissioned by Alabama Shakespeare Festival in 2020 as a streaming event prompted by the public-gathering risks associated with the COVID-19 pandemic. The video document was potent last year, but now, again under the direction of artistic director Rick Dildine, it’ll appear with theatergoers in the same room as Lambert — at ASF’s Octagon Stage in Montgomery, Dec. 3-24, 2021.

Get tickets here. Below, check out my Q&A with the veteran Alabama actress who has spent 35 years working with Alabama Shakespeare Festival. She’s currently deputy artistic director at ASF; she’ll play one of the “weird sisters” in Macbeth there in early 2022.

In her 73-minute solo-actor adaptation of Charles Dickens’ 1843 novella, Lambert plays the classic tale’s narrator and all the juicy Victorian characters — past, present and future, dead and living, young and old, earthbound and ethereal. 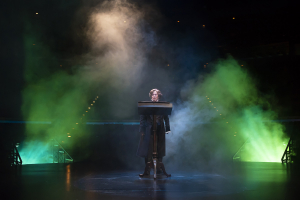 Greta Lambert in her own adaptation of “A Christmas Carol” for Alabama Shakespeare Festival. (Photo by Frank C. Williams)

In Rick Dildine’s trim, sensory production, Lambert is in britches and top hat, a waistcoat and jacket, standing at a lectern as Dickens might have when he toured and read his own work aloud. Her voice creates the world. A population emerges, thick with a range of accents from the British Isles.

Lambert’s script is a brisk, clean, theatrical editing job that should get other theaters interested in the adaptation, and in her hope to adapt more titles.

“I have lots of books I would love to adapt for one or two actors — ‘Great Expectations,’ ‘Madame Bovary,’ ‘Mrs. Dalloway’ and so many more,” Lambert told me.

“The project was always meant to be a streaming event, because of the COVID restrictions,” Lambert said in 2020. “I would love to do this as a one-woman live show some day.” Last year’s streaming version she said, was “very much a stage production caught on film.”

Well, she got her wish this year — it’s live, in front of an audience! 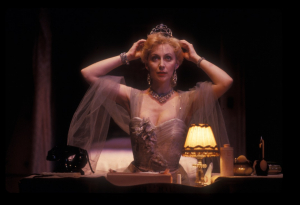 Lambert’s career at ASF — designated as Alabama’s State Theater — has included playing Cleopatra, Gertrude, Lady Macbeth, Blanche DuBois and many other iconic roles, as well as adapting and directing Shakespeare plays for the ASF young “fellows” company. She began working at ASF in fall 1985 in a production of A Midsummer Night’s Dream, playing Titania, directed by then artistic director Martin Platt.

A Birmingham native, she saw a school production of Macbeth in the fifth grade and knew she had to play Lady M one day. (She eventually played the part at ASF.) As a teenager, Lambert fell more in love with the stage when she acted and worked on props (with her mother) at a community theatre that later became Birmingham Festival Theatre. She earned an undergraduate degree in acting from University of Montevallo and an MFA in acting from the University of Florida. 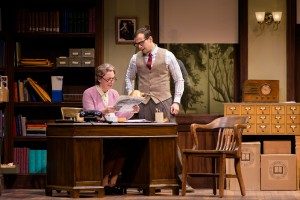 I first knew Greta’s work when I saw her as the Mother Superior in a production of Doubt, directed by Martin Platt, at Pioneer Theatre Company’s home in Utah. At the time, I was writing a Montgomery-set play about a formidable librarian. I had Greta in mind when I continued working on what would become my six-actor, one-set play Alabama Story. I was thrilled that she was cast in the world premiere in Salt Lake City (directed by Karen Azenberg) and then again later in the March 2020 Alabama Shakespeare Festival premiere (directed by Dildine). The run at ASF was sadly cut short by a week due to the pandemic.

I was lucky my career coincided with Greta Lambert’s. And hope it will again. She’s still in my head. I’m still creating characters for her. For now, here’s my chat with her about A Christmas Carol.

What’s the genesis of your solo-actor version of A Christmas Carol?

Greta Lambert: Rick Dildine wanted to give the community something joyful at the holiday [during the first  year of the COVID-19 pandemic in 2020], so he suggested I do a reading of Dickens’ A Christmas Carol. I was thrilled at the idea of playing all the roles! I dearly wanted to do the adaptation, and Rick agreed. What fun it was to wander through Dickens’ work: I loved the way he, as author, often broke from the narrative to speak directly to the reader. That device seemed very theatrical to me, so I have kept as much of that element as possible. 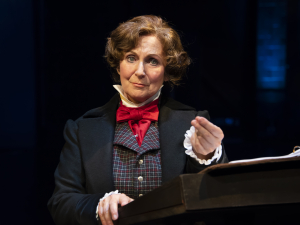 What were your goals as adapter on this? What do we “see”?

Greta Lambert: My original thought for this presentation was that our familiar Aunt Greta or our neighbor, Miss Greta, or our favorite Granny Greta was going to read, to the entire family, a special holiday treat. I think there is something comfortable in this familiar, classic story of Ebenezer Scrooge. Having one person play all the parts is enough of a surprise to keep the story fresh, I hope. I believe that in our current situation something familiar for the holidays is like comfort food for the heart.

The audience sees from the first moment that this is a reading on a stage. It is beautifully lit as scenes change. The production has a wonderful soundscape by Melanie Chen Cole. Lighting design is by Jeff Behm and the costume designer is Jeffrey Todhunter. Their elements really give the presentation the feel of a full production. Rick’s production gives the story mystery and atmosphere.

In Rick Dildine’s staging, you’re in male Victorian garb as the storyteller. It suggests a Dickens-like narrator. In future licensing of the play, can the role be played by a man, a woman, a trans or non-binary person?

Greta Lambert: My costume in this production is meant to suggest Dickens. That was Rick’s idea, and think it absolutely gives the audience a sense of surprise and a feeling that you’re about to go on a ride full of mischief and twists, which is what Dickens is about. A woman dressed as a man is not in my script. This story can be told by anyone. The fun for the actor is in creating all the colorful characters of Scrooge’s world. Every actor would bring his/her/their unique imagination to the characters and the narrator. I think it’s exciting for this story to be told by a woman, no matter how she’s dressed, since it’s usually told by a man. Rick and I spoke often about tone and pace. As a director, he gave me room to follow my instincts. 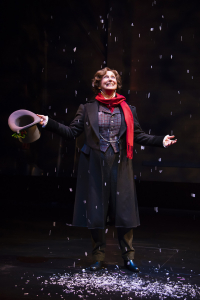 There is a thin line between adapter and editor when you’re creating a reading-style production. Did you change the script/dialogue, or is this Dickens’ exact story, with edits?

Greta Lambert: I made small changes, but primarily the script is Dickens’ story with cuts. Dickens has quite a lot of dialogue in the story. There were times that I turned narration into dialogue. One example is when Scrooge walks up the dark stairs. Dickens says, “darkness was cheap and Scrooge liked it.” Well, that line just begs to be said by Scrooge himself, so I … say, “Darkness is cheap. I like it!” And yes, all the famous lines are in the play: “God bless us, everyone,” by Tiny Tim; “If they had rather die, they had better do it, and decrease the surplus population,” by Scrooge; and of course, “Bah! Humbug!”

You’re an actress, director and now adapter. Would you like to direct a production of your own adaptation one day?

Greta Lambert: I would love to direct another actor in this adaptation. I can also envision a production with two actors.

Do you have a special passion for works by Charles Dickens?

Greta Lambert: I have always loved Dickens. “Great Expectations” and “Little Dorrit” are two of my favorites. I love how he understands human behavior and the world we live in.  He has great insights into poverty, dreams, cruelty and charity. He knows us. 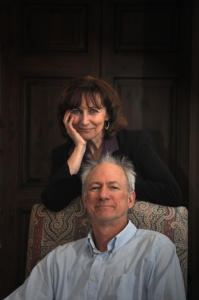 What was your first encounter with the Dickens story? As an actress, what’s your experience with it?

Greta Lambert: I have seen so many versions of this story.  I think my first was the animated “Mr. Magoo’s Christmas Carol,” as a child. I remember the characters in Old Joe’s shop [when the dead Scrooge’s worldly goods are being picked over] were terrifying. I’ve been in many stage productions of A Christmas Carol. I have played the Ghost of Christmas Past, Mrs. Cratchit and danced at Fezziwig’s party. My husband Rodney Clark played Scrooge for years at the Alabama Shakespeare Festival. I have certainly borrowed moments of his performance. I consider my “performance” as an homage to all the incredible actors who have been in the play.

The advance of the pandemic of COVID-19 has had a devastating impact on our industry, worldwide. It has forced many theater people to reimagine their careers. You’re no exception.

Greta Lambert: Like so many artists, I was laid off. I have been a company member of Alabama Shakespeare Festival for 35 years, wearing many hats — actor, director, MFA faculty, education director, director of the fellowship program and, for the last two years, associate artistic director. I spent [2020-21] examining my life and what was important, and doing lots of gardening. I missed so much about theater, especially mentoring young professionals. What joy they gave my work and my life. I also love being part of a company. We inspire each other. We have been a united body that works to create something exciting to share with audiences. It is hard work, but glorious work.

You were so brilliant as librarian Emily Reed in the world premiere of my play Alabama Story in Salt Lake City in 2015 and then again under Rick Dildine’s direction in its ASF premiere in 2020. As I told you, your voice and quality were in my head when I was writing it. The play is set in Alabama. Ironically, the main character is not from Alabama.

Greta Lambert: I loved playing Emily Reed. She was so different from any role I had played before and I loved the journey of trying to find her. I loved her for fighting for what she believed was right. I think the play speaks to the struggle between power and the pursuit of what is right. Also, playing a role in a world premiere is thrilling!